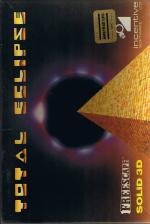 Last Christmas's Mastergame was Driller. In July, the sequel Darkside, was also a Mastergame. Can Incentive make it three in a row with their latest Freescape game?

Evath and Triscupid have been left behind and Freescape, the 3D environment you've no doubt heard about (You'd have had to be living on Evath not to!), has travelled back in time to Egypt. The year is 1930. The date is the 26th of October and the time shortly before breakfast (if you have breakfast about 8:15am, that is!). A total eclipse of the sun is due just before 10:00am, and if you don't do something about it, this review won't get finished because this could be The End of Civilization As We Know It. As the sort of person who finds himself or herself saving the world on a regular basis, you're the ideal candidate to go into the pyramid and smash that shrine.

The screen is the now familiar 3D Freescape view of the world, while above it there's a moneymeter and a representation of the moon's and sun's relative positions. Any treasures found inside the pyramid increase the moneymeter which works like a score. Below the main screen is a row of hieroglyphics (more on these later) and a row of four icons: a wrist watch, a water bottle, your heart beat and a compass. Water is used up as you explore the pyramid in the heat of an Egyptian morning and your heart rate increases if you're exerting yourself. Take the heart too far and you'll have to take a rest a cardiac arrest.

You begin standing outside your plane that has just arrived in the desert. (Doesn't look as if it could've flown here with that propeller, though.) The moon is just touching the sun as the approach to eclipse time begins. Look around and you see some sand, some more sand and - what's that over there? Yup, some more sand. Quite a lot in the sand department, really. Fine if you're in the egg-timer business; not so good if you're trying to eat a cheese sandwich. Fortunately, this featureless waste is relieved by a whacking great pyramid. (Hint: before going in and beginning your mission it's well worth visiting the plane, there's something hidden on it.)

As you enter the pyramid you see two things that are going to be very important to your quest: an "ankh" (Egyptian symbol of eternal life: it's a tall cross with a loop on the top) and a water trough (English symbol that there's no tea available). Ankhs are used to open up parts of the pyramid that are otherwise blocked, while water is needed to keep your water flask topped up. If it becomes empty, your heart rate increases. At any time you can rest to reduce your heart rate, but this naturally takes time, and the eclipse draws ever closer. Collect ankhs by bumping into them and fill your water bottle by touching the trough.

The row of hieroglyphs between the playing area and information panel aren't all useful, but many are. They show which direction you're moving, whether you're crawling or walking, how big your steps are, the size of angle, and there's a gun or pyramid to show whether you're in fire or walk mode and also the name of the location to help in mapping.

Inside the pyramid, you'll find big chests (not the Barbarian or Vixen kind) and urns. Touching an urn or chest gains you money. The chest must be opened first - shooting it with your revolver does the trick. There are some other vaguely coffin-shaped objects in some rooms and surprisingly enough they often contain mummies. These are no ordinary mummies though, because these mothers can spit acid if you get too close and - hardly surprisingly! - this does your heart no good at all.

The pyramid has some 50 locations, with considerable variations in size. Some areas are blocked off until you've solved a problem, and you'll gradually start to work your way upwards.

Many problems are hieroglyphics on walls: they're usually in pairs, and shooting one changes something in the room with the other hieroglyph. It might for example open up a secret door, slide a wall across or disarm a trap.

Certain sections of the pyramid have pressure pads on the floor that can be lethal, setting off poison darts that get your heart pumping disastrously. It's essential to look down when you enter a room, because the floor could be a good distance away. Most drops aren't fatal, but none of them are exactly healthy. Some parts of the pyramid do things when they're shot, in good old fashioned Driller style.

It's not absolutely essential to make a map, but it definitely makes things easier. Unfortunately however, the floors aren't all on the same level, so a bit of 3D mapping is necessary. Keep looking around, because you'll see ankhs, traps and loads of other things on the floor, ceiling and high up the walls. Control is very similar to the other two Freescape games but there's a useful extra control (the F key) to face you forward again if you've confused yourself as to which way the floor is. There's also the essential save and load game options.

It can't honestly be claimed that there's been a vast improvement in the already extremely high graphics quality of Total Eclipse's two predecessors, but on the other hand speed has increased. Things are still angular and smooth, but this is a trade-off against speed of screen refreshing. One relatively minor complaint must be made for the third consecutive time, and that is that sound is still uninspiring, being limited still to a mere handful of effects and no tunes. Incentive plainly feel that the memory required to create good in-game sound is simply not worth the sacrifice.

Incentive continue to improve their system and their games just go from strength to strength. This time round there are more problems to solve and a 66% bigger playing area to explore, making the objective even more challenging. There is also more than one solution to most problems, making it possible to solve the game in many ways. You could even go back for another go and try doing it another way.

If you've seen either of the two previous Freescape games you will need no persuading that Incentive have something really special. When we tell you that the extra locations, puzzles and added speed make Total Eclipse a faster moving and even more exciting adventure than Driller and Dark Side put together, you should be convinced. And if by any chance you've so far not had the pleasure of Freescape's acquaintance, wait no longer.

Total Eclipse: now you know what you want for Christmas.

Once in a while - it seems to be at about six month intervals - we get a game that I just can't wait to get home and play all evening, Sportsnight or no Sportsnight.

This time last year it was a little thing you may remember as Driller. Six months ago it was Dark Side. Now it's Total Eclipse.

It's still Freescape, of course, and if you hated either or both of the others then it's unlikely you'll be converted by this one. But I've yet to meet anyone who falls into that category.

No problems, though you're missing a colour treat.

One little touch that really tickles me and somehow sums up the face of Freescape third time round is the high-score. Incentive have put a pound sign in front of it, and although that shouldn't make a scrap of difference, it gives getting a high score a meaning it never really had in Driller or Dark Side.

It tells us too that we're definitely out of the abstract, space-age 3D and into a recognisably human world. Egypt is an inspired choice: the pyramid, the flat sand and the baking sun are ideal Freescape fodder (smooth and monochrome), while the mummies, hieroglyphics and associated hocus-pocus all add atmosphere. This is evident too in the manual. With Driller they had to produce a lengthy and, truth be told, rather tedious novella to conjure up a sense of reality; but with Total Eclipse, a few paragraphs do the job admirably. You don't necessarily believe in it - in fact it's a load of old camel-droppings! - but that doesn't matter in the slightest. It's just something to hang the game on, and as such works perfectly.

Ian Andrew, as you'd expect, is keen to point out the improvements to the Freescape system. There's no use pretending that an 8-bit machine is ever going to have the graphics ability of a Quantel Paintbox, but Incentive have tried their very hardest to make the most of what there is. And since they do their development on a CPC, they know the machine and its capabilities inside out.

One thing, though: in the game your heart slows down when you accumulate treasure.

Grab Factor 92%
P. Not too tricky to begin with, but things get tougher as you get further into the game.
P. Few instant-deaths which can put you off a game.

Staying Power 95%
P. 50 locations to explore and two hours of real time to do it in.
P. More puzzles to solve and many ways to solve them make it less trial and error and more fun.

Overall 93%
The best of the three Freescape games. More puzzling and things to do.

The best of the three Freescape games. More puzzling and things to do.