﻿ Tomb Of Syrinx (The Power House) Review | Your Sinclair - Everygamegoing 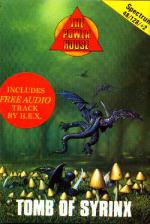 If it wasn't for the fact that The Power House is the new budget label from CRL, I would swear on my aardvark's life that this was an old game that had been hanging around for years. It has the same style of graphics as the old 16K games, and the screen scrolls jerkily, two spaces at a time, so that you have no idea what's ahead and you die - very quickly.

The idea is to collect five keys. If you don't get killed, mangled or mutilated in the process, you're lucky. The nasties you meet are nigh-on invincible, needing hit after hit to be disposed of, and they cunningly appear out of nowhere, usually exactly where you're standing. At one point I stepped on one (well, I think I stepped on one, if I didn't...), lost all my lives in one fell swoop and the game crashed, leaving me with an empty screen. Yep, folks, Bernie the Bug strikes again!

A free audio recording has been added to the game, for some strange reason. As far as I could tell, this sounded like two cats - one being throttled and the other being forcibly fed through a mangle. Not a pretty sound, and unnecessary as far as the games concerned.

Come on CRL! With Mastertronic, Firebird and Codemasters producing some high quality budget games, this doesn't have a chance. Any more like this and they'll be sealing your tomb!

Come on CRL! With Mastertronic, Firebird and Codemasters producing some high quality budget games, this doesn't have a chance. Any more like this and they'll be sealing your tomb!