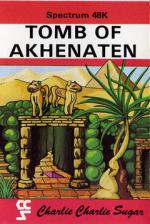 This game deserves an award for worst computer game of the year!

You play an explorer who has stumbled across a tomb filled with fabulous treasure. Screen display shows a crude maze plus your strength and treasure ratings. This is not an arcade game; you move your one-character sized man around at a deathly slow pace, trying to find the key and door to the next maze.

Hazards come in the form of spiders, asps and spirits, which appear at random and can be fought or occasionally bribed (rather pointless). It's all really thrilling stuff, with four different mazes to get through.

Graphics are provided by the User Defined Graphics, which jerk along with uninspired animation and definition. Sound considerably slows the game down although the tunes, played at such exciting times as reaching a magic place (saps or adds to your strength), are good. The game is written in inefficient Basic, and is unplayable without cheating. There is a hall of fame, but who would play it more than once?

This really is total rubbish, even at the cheap price. Avoid it like the plague.

This really is total rubbish, even at the cheap price... Avoid it like the plague.