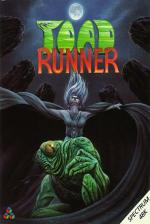 If you are an ambitious toad wanting to be returned to your princely form you can't just hang around on the nearest lily pad waiting for a smoochie princess. In Toadrunner the animated amphibian has decided to take some positive action and makes off to find the royal antidote.

In his way are many hazards, enemies and problems strewn through over 50 locations, which may not sound very many but this is plenty to keep you occupied on the way and the triple exits between some screens add an extra element instead of just wandering from scene to scene. There may be three exits to the next screen but only one is passable, the other two lead to swift termination. At first these exits must be tried at random, which can be infuriating as the safe exit may change every game. There are however subtle clues in the rocks around each entrance to give you a hint on which exit to take, but it takes a while before you can read these signs with confidence.

Many potentially useful objects are scattered around the locations and any four can be carried at one time. Using an object is simplicity itself - just make sure it's placed in the toad's "fourth pocket" and hit the fire button. An axe-wielding toad is especially effective in dealing with some of the creatures who guard entrances.

After a while (six toad units we are told) a flitting thief appears in order to spread confusion by stealing any objects that might be around. He can only hold one and can drop what he's filched any second to nick something else. He's a nuisance but not indestructible, killing him takes up a lot of your energy and make sure he's not carrying something vital to finishing the game before you finish him off because in his case he can take it with him.

Toad death is a little complicated. He is given five lives and loses one each time his energy runs out. Taking the wrong triple exit and getting squashed do, however, mean the wiping out of all lives, which seems a bit harsh and means you face a lot of annoying restarts before you really get into the game.

A screen display at the top of the screen shows the objects you are holding, toad units ticking away and percentage of the game completed. I managed to complete 15 per cent and it kept me busy for a good while so don't be put off by the apparent low screen count - it's not quantity but quality that counts and Toadrunner offers good value. It may not be the most original game in the world, and spotting the forerunners to Toadrunner could be a game in itself. Despite this, it's an enjoyable game with enough perplexing problems to keep you on the hop.

An enjoyable game with enough perplexing problems to keep you on the hop.