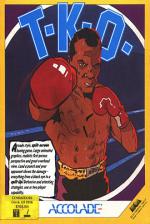 He flies like a butterfly and he stings like a bee - he's the greatest. There's ain't never gonna be no more Muhammed Ali.

Or is there? If you fancy changing a bit of history, you can pit yourself against a mate or take part in the computer-controlled championship right to the final title fight.

In championship mode you pick your fighter from a team of four eyebrow bashers (if one gets knocked out you keep on boxing until you run out of men). For the hot heeled action itself the screen is divided into two halves to give the first person perspective of each fighter. You see your opponent's head and shoulders only (though there is a mini overhead view) and select your punches using the joystick.

Points are awarded for number and success of punches thrown and unless there's a TKO (tehnical knock out), a display at the end of the fight shows how the decision was awarded on points. If both players get the same ponts, the winner is the guy who was highest on style. Far out, eh?

You've got to admit, ths is a pretty unusual way to stage a boxing sim and as far as the graphics go, it actually seems to work.

Fists come towards you out of the screen and you can see exactly what sort of effect your punches have had on the other bloke. Trouble is, the gameplay just doesn't match up to any of that.

Because it's literally head to head, there's very little skill involved: no matching your movement with your strokes, just plain old waggling the joystick around and pressing fire.

Make sure you know what you're getting before you buy.

Simulating boxing without including a ring, a referee or even the boxers' legs - doesn't sound overly promising and erm... well, it isn't really. The graphics look very nice but the boxing itself is really basic.

You don't need much coordination to throw a few punches at a static face and the whole idea of timing them is made pretty ridiculous by the fact that you've got to keep switching your attention to different halves of the screen.

Unless you're a really die-hard boxing fan, I'd think twice about buying this.

Hookability 64% Once you've read the manual, it's easy to get the hang of this.

Lastability 41% It just doesn't have enough action to keep you coming back for more.