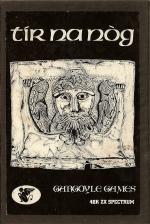 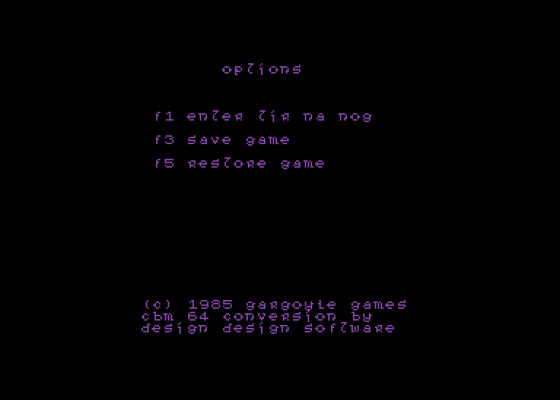 Tir Na Nog has been around on the Spectrum now for a few months and received excellent reviews when it first appeared. It has now been converted, and now C64 owners have the chance to experience the world of Celtic mythology.

Playing the hero Cuchulainn, your task is to reassembe the four fragments of the seal of Calum which are dispersed throughout the land. If that sounds like an adventure quest, then yes it is but there is no text input in this game! As with Lords of Midnight, the game is controlled through a series of function keys which are assigned to movement and picking up objects etc.

The screen is divided into two main areas. The top half depicts you and your surroundings whilst the bottom half gives details of what you are carrying, where you are and which way you are going etc, all written in a celtic character set. Movement takes some getting used to. 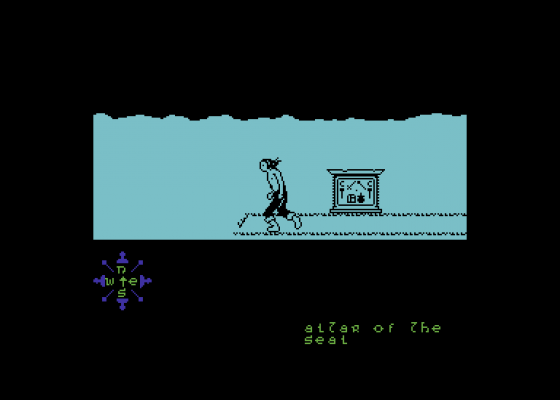 You can only move left or right and so if you wish to move off at right angles, you have to rotate the character and wait for the screen to redraw itself. A compass in the lower half of the screen informs you which way you are heading. As in most adventures, the game can be saved at any point.

The lands which you have to explore are large and one complaint of the game is that it takes a long time to go from A to B. This is a deliberate move on the part of the authors to give an added feeling of time in the quest.

There are plenty of objects lying around to be manipulated and lots of different doors (including invisible ones!) some of which act as transport systems to other areas of the game.

This game has stimulated a whole new interest in the myths and legends of our country and it is interesting to see how the same characters crop up in different mythologies. Making an appearance in Tir Na Nog is Cernos the Hunter who can also be found as Herne the Hunter in the Robin Hood series currently being shown on television.

Whilst the game is quite difficult to get into originally, perseverance pays off. Cuchulainn has become such a cult figure (or should that be Celt figure?) that he is to star in another game - Dun Darach - to be released by Gargoyle shortly. That says a lot about the quality of Tir Na Nog and C64 owners who enjoy this type of game should think seriously about investing in a copy.

Cuchulainn has become such a cult figure that he is to star in another game shortly... That says a lot about the quality of Tir Na Nog.