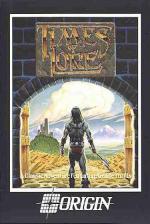 They don't get much bigger than this (fnar). Or harder (phwooargh). But enough of this innuendo, 'cos this is perhaps one of the longest, most absorbing games you can get for your Speccy. If you like your game playing in short, sweet bursts (like me) it mightn't be quite your cup of tea, but otherwise read on.

The story - and this is a very sawn-down version because it takes up many, many screens to explain - involves you as a lone warrior trying to whip your decadent kingdom back into shape. It's a bit of a problem 'cos barbarians are attacking from one side, various dangerous monsters on the other and there's plenty of internal feuding going on between the local nobles. You play one of three characters (a valiant Knight, powerful Barbarian or nimble Valkyrie) though it seemed to make precious little difference which one you chose.

The games takes place on a huge four way scrolling map, of around 5,000 screens by 8,000. So it's big. But amazingly enough it all works on a single load - no drive access needed even on the cassette versions!

So, off you go. You begin in the bedroom of an inn and must run around (with your feet making a nice little slapping sound on the flagstone floor and the four way scrolling working very smoothly) until you find the stairs, at which point you descend into a sort of bar. Here you'll find a few characters spread around eating and drinking, and can begin a conversation (or a fight) with any one of them. Depending upon who you talk to, you will end up with one of a few possible sub-quests which make up the game, such as recovering an important lost artifact or defeating a powerful villain. A candle on the right of the screen shows your power slowly dying down, but it can be replenished with a good night's sleep.

Graphically the game is very nice with its massive play area, tiny (but clearly defined) sprites, smooth scrolling, and nice little touches (like the roofs of buildings disappearing as you enter them). It would take weeks - perhaps longer - of pretty intensive playing to complete it, which puts me in the rather weird position of having to review a game when I've only really scratched the surface.

What I can say is that what I've seen has been fascinating, and lacks much of the aimlessness that I've felt about some similar games. It's still possible to walk off into nowhere, get lost and simply run out of energy, but if you keep whatever subquest you're involved in at the front of your mind you shouldn't go too far wrong. Not a cheap game, but if you've the time and the inclination, I doubt you'll be disappointed.