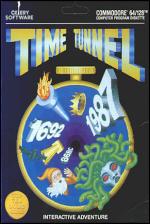 The gnome king is coming to the end of his reign and is in search of a worthy successor. You have managed to catch his eye so far and if you can succeed in this task must have an excellent chance of being selected.

An evil cyclops has stolen seven pages of an ancient gnomic scripture and scattered them throughout the ages of time. If you can recover and decipher them, you will release some of your kindred who have been trapped by tree spirits and wouldn't otherwise have a gnome to go to.

Starting off in the gnome mansion, you soon find a time machine and how to use it. There are seven ages you can select from, each containing a page of the script. The ages range from a prehistoric stone age to a futuristic black hole, calling in on ancient Greece and Persia, seventeenth and nineteenth century America and an intergalactic spaceship. Each time zone has several locations with objects scattered throughout to help you on your quest. The locations are strangely arranged. In the house for example you enter a room from the side but can only leave it via a door at the far end.

Your gnomes can only hold one object at a time athough he can use a storeroom whenever he wants he can store up to four items. Most of the things that you need can be found in the appropriate time zone, but some do not and you can make good use of a time hole to whisk you off to another period which should be helpful to you.

Control of your gnome is entirely via the joystick. What happens when you press the fire button depends on where you are and what you are trying to do. First choice would be to perform an action such as open a door or pull a lever, etc. If you are carrying an object, you drop it and if you are next to one, you pick it up. Finally, if none of these apply, you fire a lightning bolt.

The game's graphics are average and some of the tunes are somewhat out of place - Swing Low Sweet Chariot, a negro spiritual, is used to denote ancient Greece. The possibilities for a game based on time travel are enormous, but Time Tunnel does not particularly do them credit. The gnomes at the bottom of your garden may enjoy this one, but that's about all.

The gnomes at the bottom of your garden may enjoy this one, but that's about all.