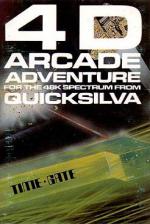 A review of the new 4-D adventure from Quicksilva, with Phil Garratt at the helm

Three dimensions were not enough for the latest addition to Quicksilva's long line of machine code arcade games. Time-Gate involves travelling backwards through the fourth dimension, time itself. We are told that the two thousand year old interstellar Empire founded by Earth was happily going the way of all empires, that is into decline, when the Squarm turned up. They are a race of insectoid reptiles, and before long they had taken over the entire Empire, except for a few planets centred on the Earth.

The Temporal Brotherhood decide to overthrow the Squarm, but instead of doing the decent thing and fighting it out man-to-man (or rather man to reptile), they hit on a sneaky trick. They dig out the two thousand year old Void-Runner 1, a trans-dimensional space ship, and give you the mission of travelling back through time via the Time-Gate until you can destroy the Squarm's home planet before they ever left it.

The galaxy is made up of eighteen sectors, one of which contains the Time-Gate which your ship will automatically pass through provided there are no enemy ships in the sector. Knocking out the enemy ships is the central part of the game which all the rest has been tacked onto. The top two thirds of the TV display are used for the three-dimensional view of space and as you steer your craft, the stars swirl round according to your movement.

When ships appear they weave in every direction, diving nearer and further away, al the time firing pot shots at you. You have to manoeuvre your craft until the enemy is in line with your two lasers, which fire from either side converging into the centre. I found it best to try to line up the alien along one or other of the beams rather than try to hit it at the narrow point where the beams meet. Unless you get a lucky shot, it will usually take four hits to knock out the opposition, and you can tell when a hit has registered because the enemy ship changes colour.

An unusual arrangement of keys are used for movement - 6 and 7 for left and right, 8 and 9 for up and down. Zero fires the lasers. The program comes with a little keyboard overlay to help you remember them, but before long the keys are memorised and then the overlay tends to get in the way rather than help.

The bottom third of the TV display is your instrument panel. To the left is the long range scanner which shows all eighteen sectors. Alien ships are marked as a short line, and a planet, where you can have repairs done, is shown as a cross. The display is very small indeed, and some people with ropey TVs (or eyesight!) may have some difficulty. In the centre of the console display is the message system, which flashes up details about damage sustained and other information as the game progresses. To the right is the target computer display, which consists of four horizontal lines each with a marker on it and is only active when there are enemy ships in the area. The first two lines are the vertical and horizontal tracking indicators and when you have steered Void-Runner 1 so that the markers are in the middle, you are right behind the 'baddie'. The third indicator gives the closing speed and the fourth, the distance between you and the target. The enemy are scattered randomly within the sector, and you can have quite a long wait before they appear on the upper display.

The last console instruments are the status indicators for shields, weapons, engines, etc. They start off green and go steadily darker as the systems are damaged, until they turn blue which means that that function is knocked out. When you take a hit, the damage seems to be allocated randomly to one of the various systems, so if you're unlucky all the damage may be done to ust one system, and if it takes another hit after the indicator has turned blue, your ship is destroyed.

The rest of the control keys are as follows - 1 to 5 control your warp speed, and you can tell when you go faster because the starts rush by, and the engines, which make a constant hissing sound, go to a higher pitch. To jump to a different sector, you press 'L' until the flashing indicator on the long range scanner is over the sector you require, and then press 'J'. You then make your jump, accompanied by some impressive sound and visual effects. To carry out repairs, you have to jump to a sector with a planet and knock out any aliens. Then pressing 'P' causes a landing, also accompanied by very ingenious graphics. All your systems are then restored to 'green' status; however, this does result in the unfortunate planet's destruction. Perhaps they would have been better off under the Squarm! 'H' suspends the game and 'S' restarts it, and 'Shift Space' aborts the current run.

The game progresses by knocking out as many aliens as possible, finding the Time-Gates, stepping back through time to year zero, then finding the Squarm home planet and firing your Meson Ram to destroy it. The game can be played on five levels, and at the higher levels the time steps get smaller, and as each earlier galaxy has more and more aliens, the game gets progresssively harder.

The biggest fault with Time-Gate is undoubtedly the scoring system. Several times I battled my way through hordes of aliens, eventually to destroy the Squarm home base, to find I had scored between 10 and 40 points! I queried this with Quicksilva, and they said that the score is based more on your skill factor, i.e. how quickly and efficiently you knock out the aliens, rather than how many. I was told that the best tactics were to stay at warp 1 (the slowest) while in a sector chasing and fighting aliens, only using warp 5 for the jump to the next sector, and putting off repairs for as long as possible.

The program comes in two 34K parts. The first gives you the scenario and rules, and goes through the cockpit display and function keys. The program has provision for the use of a Kempston joystick, and has information about how to link in other makes. The second lot of 34K is the program proper. The documentation is rather lacking - you have to note down the control keys yourself, no information is given about scoring, and nowhere is it mentioned that you can LOAD the second part (the game proper) without going through the instructions. Still, graphics are what arcade games are all about, and Time-Gate certainly has great graphics. At £6.95 (48K Spectrum only), another winner for Quicksilva.

Certainly has great graphics, although the documentation is somewhat lacking.