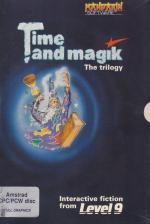 We've seen all these games before, haven't we? So why should we fork out another £14.95 to get them in Trilogy form?

To answer the first question first, have you seen these games before? Let's just remind ourselves what they're all about and why, for any fan of Level 9, these three titles happen to be among the most significant of their later releases.

Level 9 built its reputation on fantasy with the Middle Earth trilogy (now available from Rainbird as Jewels Of Darkness and one of the best classic adventure collections around). Everybody was busy finding treasure in underground caverns when suddenly the Austins stunned the adventure world with Snowball.

Not only was Snowball science fiction, but it boasted a whole host of innovations - not least the size of the game, which claimed thousands of (admittedly rather similar) locations. The game was also, in parts, extremely difficult with tough puzzles backed up by a complex map that could easily confuse the novice player - and some more experienced ones to boot!

The upshot of all this was that Level 9, perhaps propelled slightly by public (or rather press) opinion, launched into their "sci-fi" phase and released two further games - Return To Eden and The Worm In Paradise. As you probably know, this entire trilogy is also available from Rainbird (Silicon Dreams).

It's at this stage that Red Moon appeared. It was hailed at the time as one of the best Level 9 games to appear for ages, but in retrospect this was almost partly because of the return to magik and fantasy - a development viewed with relief by die-hard fantasists.

There was another reason, however. Red Moon was one of the earlier Level 9 games with graphics and although they were somewhat crude, they combined with some of the most atmospheric locations that the company had come up with for ages. Although the game lacked the subtlety of the science-fiction series, it made up for it by simply oozing with mystery and imagination.

After the success of Red Moon, Level 9 released The Price Of Magik - a sequel to the earlier program but never quite as popular with reviewers (or me!). The problem with this game is that the locations aren't quite so spellbinding, but the adventure is saved from mediocrity by a large number of spells, each of which requires a "focus", or object that will enable the spell to be cast.

Your task in Red Moon was to regain the lost Red Moon Crystal and restore the source of magik to the realm - in The Price Of Magik, the Crystal has been abducted by its guardian, Myglar, who, influenced by the power of the artifact, has dreams of immortality and supreme power (the usual thing). It's up to you to set things right by once again recovering the crystal and restoring order.

This is the first game in the trilogy, but we're tackling it last for the simple reason that it is something of an odd-man-out. Although the other two titles tie together in an obvious fashion, the scenario of Lords Of Time has little connection with them. Evil Timelords are attempting to pervert the course of history and you must travel through nine timezones and collect nine items with which to defeat them.

In many ways, Lords Of Time is the best adventure in this collection, although the oldest. Since all the games have been "reprogrammed" - which means marginally more text in places, better parsing, and vastly improved graphics - the age of Lords Of Time (originally a text-only game!) is never apparent. It was in fact one of the the first games to be written by an outside author (a lady named Sue Gazzard) and she did a superb job. Not only are the textual descriptions delightful, but the separate zones each build up into a series of mini-adventures that enhance the challenge of the game and add to its long-term interest.

It's fair to say that Time And Magik is not such a "trilogy" as the two Rainbird packages mentioned earlier. The justification for putting the three games together is that they are "key episodes from the struggles of the Guardians to protect Time and Magik" - on which basis we could probably include a few other (say a couple of thousand) games as well. But who's complaining? At £14.95, it has to be one of the best bargains available.

If you already have one or even two of the titles. I'd say that Time And Magik is still worth purchasing, simply to get hold of the third. If you've played all three, it probably isn't, but I can't help feeling sorry for anyone who feels compelled to decide against adding this jewel to their collection.

The big idea with all these compilations of Level 9 games is that the originals have been "reprogrammed" - what do you get?

First and foremost, you get digitised graphics. That doesn't mean you get very realistic images as in the Magnetic Scrolls titles, but it does mean that the pictures are a vast improvement on the earlier Level 9 pictures, which were - to say the least - uninspiring in both colour, style, and content. And of course Lords Of Time had no pictures at all in the original version!

Next, you get rather more stylish programming. The biggest difference here, in real terms, is the "Ramsave" facility but you can also enjoy a slightly more powerful parser. The improved parser is something of an unnecessary bonus since the basic structure of the games remains unaltered and therefore you don't really need a more powerful command structure - but it is a much more friendly system than before.

Finally, you get the scrolling graphics as in the Magnetic Scrolls games and a picture cache that cuts down on disk accesses. Not bad for under 15 quid!

I can't help feeling sorry for anyone who doesn't add this jewel to their collection.