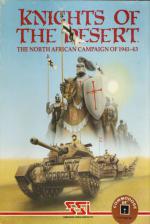 Tigers In The Snow/Knights Of The Desert

These two games are reviewed together as they are a very special case. One is based notionally on the Battle of the Bulge, the other on the Desert War. But neither is, or pretends to be, a wargame. Rather, they are computer reproductions of board games about war, which is not the same thing.

The board game mechanisms, established by firms such as Avalon Hill and SPI, of hex-grids, zones of control, combat points and movement phases, are here simply transferred to the computer screen.

The program moves the units by hex, and rolls the dice, while the rule booklet provides the player with complete rules as if for an ordinary board game. The player is told on each move the movement and combat value, in terms of points, of his own and the enemy's units, and is required only to make yes/no decisions as to which units are to attack and move.

The whole program, on both games, cycles at the slow pace of a board game as well. Tigers In The Show can be played by one or two players, Knights Of The Desert by two players, or by a single player as Axis forces only against the computer as the Allies.

These are both by no means bad games, any more than Monopoly is bad for failing to simulate business business and property speculation.

Tigers In The Snow/Knights Of The Desert

An interesting type of game. It looks like a wargame but actually it's a computer reproduction of a board game about the event. Not to say that it's bad, just different.