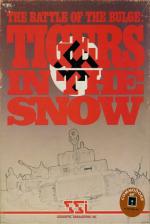 Tigers In The Snow | Verdict

At the close of 1944 the remnants of Germany's armed forces launched one of the most daring counter offensives of the war. The fighting had slackened in the approach to Christmas Germany had formed new divisions equipped with tanks like the Hunting Tiger, that could stop the shells of all but the most powerful allied weapons. Finally, they launched their attack in the one place the allies thought impossible - the Ardennes. Because of the dense forests, nobody suspected a massive tank attack would be possible. As a result, the US had positioned weak combat-weary units there. The result was a major breach of the allied frontlines which could have been catastrophic if it had not been for the fact that the enemy could not keep their troops adequately supplied. This factor, coupled with the outstanding resistance of 7th Armoured Division in St Vith (who's commander sent the message 'nuts' when asked to surrender whilst totally outgunned and outmanned) helped create the delaying action necessary for the allied forces.

In other words, one great subject for a wargame...

Actually, this is rather old stock as far as SSI are concerned, but it is also one of the first to be repackaged in the Transatlantic Simulation guise, intended as the format for all future licensed SSI releases. A slim, gatefold disk package means that SSI's traditionally chunky instruction books have had to be reduced to a glossy colour, fold out insert - not the easiest of items to refer to whilst playing, especially as there is no reference card. Still, the instructions are legible and a map of the play area, is back printed onto them.

As is the norm with even these relatively early SSI games, the player is offered a wealth of options for play. Either the German or Allied side may be chosen, a two-player option exists and the computer may be asked to play against itself. Levels of difficulty for each side may also be selected before the game commences. These reflect how many combat points are added to or subtracted from the historically accurate combat values of each side's units. Two versions of the game may be played. One is the Bastogne - St Vith scenario covering the period up to the sixteenth of December, and the other is the campaign scenario which runs until the 27th. Victory is based on a victory point system which varies depending on the game selected.

If you select the Allied forces, the game begins in the middle of a turn with the German units heading directly to combat. It is in their interests to reach the Western map edge as soon as possible, in order to gain she most victory points. To help both sides make the moves they feel most in their interests, a possible four attack and four defense strategies may be made for each unit. Basically, these determine the level of ferocity at which the units will enter combat. The harder these strategies are put to use, the more likely there will be a computer-controlled modification to the original orders.

The thorough rules system accommodates such details as weather (variable but reasonably historically accurate), air support, artillery fire (handled on a points basis), advance after combat and zones of control. Logistics play an important part (especially where the Germans are concerned), as does the effect of the terrain. Anybody looking for detail and authenticity will find plenty of it in this game. One of the main complications in play is the result of not having joystick control. Because of the hex system employed, units follow a numerically input direction order and various long drawn out key pressing routines. Ah well, all this was written in the time when people thought all you could do to a window was double glaze it.

Worse than this, however, is the confusing rules leaflet. Sections of rules are repeated for no apparent reason. Terrain is explained, but unit identification markers are not - in which case why have them? Other than victory point totals, little is explained in the way of victory in the different scenarios, and sloppiness and ambiguities in basic instructions make the handling of units quite difficult for those with little previous experience of such games. In fact, the general tardiness of the physical presentation is a great letdown.

During play itself, things get better. The map is fairly easy to follow and you soon know which units can do what. Play can become quite fast once familiarity with the keyboard is gained, though the length of the game does not demand speed. A whole game could easily be played in an evening. Of course, there are saved game options anyway.

Tigers in the Snow is beginning to show its age. It lacks features prevalent in more recent SSI fare and has more faults than any I've reviewed so far. Having said that, it's important to see this game in perspective, It's weak by SSI standards, but it will be a while before anyone else comes out with a better simulation of this era, methinks.

Graphics 84%
Neat ID markers and stuff. Shame about the screen redrawing instead of scrolling.

Authenticity 86%
The game's integrity doesn't suffer as a result of poor presentation features.

Playability 82%
Tricky at first because of the unit control, but you soon get used to it.

Overall 82%
An old but good game at a fair price.

Tigers In The Snow | Verdict

An old but good game at a fair price. Shame about the screen redrawing instead of scrolling.