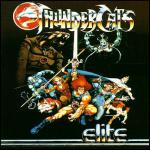 Lion-o, Tygra, Panthro, Cheetara, Wilycat and Wilykit are a humanoid race of wildcats who were forced to flee their home planet, Thundera, when it was destroyed. Set adrift in a spacecraft, they crash-landed on an alien planet, ruled over by the inevitable baddie, Mumm-Ra and his despicable minions, the Moleman. The Thundercats set up base in the Cat's Lair, and conflict between the feline heroes and Mumm-Ra soon followed.

During a daring raid by the Molemen, Tygra, Panthro and Wilykit were kidnapped, and the Eye of Thundera stolen. This mystical jewel energises the Sword of Ornens, which in turn gives the Thundercats their powers. Since Lion-o was entrusted with the gem, he decides to infiltrate Mumm-Ra's fortress, castle Plun-Dar, retrieve the Eye and rescue his friends.

The player takes the role of sword-wielding Lion-o and battles across fourteen horizontally scrolling levels to castle Plun-dar. Throughout the perilous journey, Molemen attack, removing one of Lion-o's five lives on contact. There are also bottomless pits which the heroic cat leaps across - falling into one spells instant doom. All is not bad though, and scattered throughout the landscape are supply boxes which are broken to give either a blaster, sword or extra life.

Progressing through the levels gives Lion-o the chance to rescue his allies: battling successfully through level three rescues Tygra, Panthro is held on level eight and Wilykit is found on the penultimate screen. When Wilykit is safe, Mumm-Ra himself attacks in a fight to the death. If the evil one is despatched, the Eye of Thundera is restored and the Thundercats may live in eternal peace and harmony...

Having never seen the Thundercats on TV, I can't say whether or not this licence captures the atmosphere of the cartoon. However, as a computer game, it's good, and has an inexplicable addictive quality that keeps you coming back for more.

The gameplay is similar to a fast and furious Kung-Fu Master, and getting to the final level should take a fair bit of practice. The graphics are unusual, and while the use of colour is odd, the overall effect is neat. There's a rousing Rob Hubbard title tune too and the sound effects are suitably loud.

In fact, there's only one niggle: it's possible to sit on level three and knock up an enormous score without doing much. Thundercats isn't an essential purchase by any means, but if you enjoy hacking games, this one has plenty of challenge and addiction.

First of all it was Transformers, The Gobots and Masters Of The Universe. Now everyone's favourite bunch of pussycats have been immortalised on your humble home computer.

The game is a basic hack and slay affair which I found quite playable at first. However, as time went on I became more and more bored as I hacked away at the seemingly endless droves of molemen. I think beat-'em-up fans will enjoy playing Thundercats, but I can't see it holding that much of a grip on anyone else.

Yet another cartoon series makes the journey from the small screen to the C64. Or rather, the title crosses over, leaving the actual content far behind. Either way, Thundercats isn't a complete disaster.

The graphics are a strange mixture of digitised pictures, cartoon-style backdrops and large areas of plain colour, which looks odd - but not entirely unpleasant.

Gameplay is straightforward, but lacking in control of Lion-o (Lion-o the floor covering, presumably). He can't run *and* defend himself at the same time, and can't turn on the spot. If there are moleman close on either side, as you turn to despatch the second, Lion-o walks straight into him and gets thumped.

This is annoying since you can react in time, but are unable to do anything about it. Still, Thundercats has an irritatingly addictive quality, and should provide a challenge for a week or two.

Sound 79%
Good Hubbard title music, but some of the in-game effects are harsh and ill-suited.

Hookability 76%
Enthralling action and strangely addictive from the outset.

Lastability 70%
Fourteen levels should provide a good platform for the player's hacking and slaying talents.

Overall 74%
Fails to capture the essence of the TV series, but entertaining and addictive nonetheless.

Fails to capture the essence of the TV series, but entertaining and addictive nonetheless.