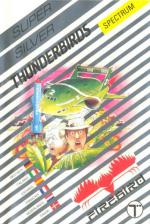 Thunderbirds are Go! This maze puzzle game, one of the first in Firebird's new Super Silver range, manages to capture the spirit of Gerry Anderson's classic TV puppet series.

You have to help the pilots of Thunderbirds One and Two rescue a couple of archaeologists trapped inside an ancient Egyptian tomb. Being a typical tomb this one is packed with traps, secret doors and deadly nasties.

You have to solve the puzzles, beat the traps and save the missing archaeologists before their oxygen runs out.

Each screen is a puzzle. You have to move coloured blocks around, using both Thunderbirds to create a pathway to the doomed men as quickly as possible. No mean feat - and you have to look out for fuel along the way.

Thunderbird One can move blue blocks, Thunderbird Two moves green blocks. Both craft can move red blocks. You often need to use both craft to solve the puzzles and move on to the next screen.

Before take-off you can equip Thunderbird Two with various bits of machinery and gear that help in the mission. Each bit of equipment you take reduces your starting score. Taking nothing at all reduces your chances of finishing.

If you come across a screen where one of the items in Thunderbird Two's hold will help out - the computer takes over and you get a short animated sequence in which the item is used to your benefit.

More fuel can be found inside the tomb. But *don't* move away from a screen once you've discovered some fuel. If you do, it won't be there when you get back.

Thunderbirds is a game for the strategy-minded games player. If you don't like solving puzzles and just want to zap things, then don't bother picking this up. If you like a challenge and have a few hours to spare, then grab a copy now. Very addictive, long lasting and fun.

Very addictive, long lasting and fun. If you like a challenge and have a few hours to spare, then grab a copy now.