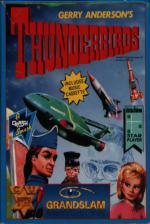 It's the boys in blue! No, not the rozzers, the Traceys. They're probably the most famous puppets in the world. But not content with having a starring role on their own TV show, T-Shirts, magazines, records and badges, those F.A.B. boys of Thunderbirds fame have gone and done the only thing left for them to do - got themselves the lead in their very own computer game.

This Thunderbirds is a big flip screen arcade adventure starring all our favourite marionettes. It's basically four games in one and takes the form of a two cassette (or disk) multiload, with one rescue mission on each side of the tape. There are four rescue missions to undertake, Mine Menace, Sub Crash, Bank Job and Countdown To Disaster. Each mission gets progressively harder and the time in which you must complete them also reduces, so planning your moves becomes vital. And in each mission you must control two Thunderbirds characters at once, toggling between the two using the space bar. So there's lots going on.

The game starts with Mission One - Mine Menace. Jeff Tracey intercepts a distress call to find that some miners are trapped in their cage deep underground. This is obviously a job for international Rescue.

Alan and Brains are quickly dispatched to the scene, Alan being dropped off at the top of the mine by Thunderbird 2, whilst Brains burrows his way in at the bottom using the Mole. Their aim (of course) is to rescue the miners before the mine floods and drowns them. But before they can even go into the mine the two characters must first tool up.

This tooling up sequence occurs at the start of every rescue mission. There are six pieces of useful rescue equipment on offer (in later missions the amount of equipment changes), but as each character can only carry two objects at a time, you have to really pick your Brains before deciding what to choose. There are other useful pieces of rescue equipment scattered around at strategic points throughout each mission, so you can drop what you are carrying and swop it for something else at any point.

'Cos of the way the characters are placed at either end of a level, there are certain tasks that only those characters can complete, so you must move one character before another in certain missions. Although in Mission Three - The Bank Job - Lady P and Parker need to work together at the beginning of their mission to puzzle their way together past certain problems.

Anyway that's the basic idea behind the game, but how does it play? I'm not a particular fan of arcade adventures myself, but I must admit this had me hooked right from the start. It's bright and colourful with nice graphics. And though the actual sprites of the Thunderbirds characters themselves aren't particularly realistic, they are large and well animated with some nice touches. The characters will sometimes turn around and talk to you, giving you the occasional clue to help you out too, which is useful for dimwits like me.

Sound is a bit limited on the 48K version, but on the 128 there's a digitised sequence from the Thunderbirds theme tune. And the flip screen scrolling is perfectly paced too, so exploring can be done quite rapidly. One big gripe though is the fact that at no point in the game do you get to fly the Thunderbirds vehicles. These were the best bits of the TV show, but the only time you get to see the vehicles in the game is at the beginning of each level when the characters are dropped off at the rescue location from them. Still, the rest of the game manages to capture the intrinsic tackiness of the TV show that we all know and love. And as it's easy to get into, and fiendishly difficult to puzzle out, Grandslam is definitely onto a winner here.

One of the best arcade adventures for a long time. Great graphics, tricky puzzles, and all your fave Thunderbirds characters too.

One of the best arcade adventures for a long time. Great graphics, tricky puzzles, and all your fave Thunderbirds characters too.