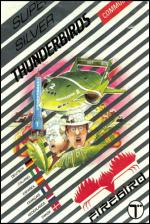 A team of Egyptologists have accidentally been trapped within the deep recesses of a newly discovered ancient maze-tomb. Their oxygen is rapidly running out and they manage to send out a plea for help on their radio transmitter in the hope that someone somewhere will hear their cry for help. Well someone does. Their call is received by Thunderbird 5, orbiting high in the stratosphere, and it is John Tracy, member of International Rescue, who hears the Egyptologists' message. The information is soon relayed to International Rescue's base and Thunderbirds 1 and 2 are go.

It's some time indeed (Lloyd remembers it well) since Gerry Anderson's Thunderbirds series first hit TV screens and became a cult. The cult effect has survived, though, and surely everyone today has heard about Thunderbirds?

After sitting through a multi-channel rendition of the Thunderbirds theme, the game starts on a menu screen where you choose the equipment you wish Thunderbird 2 to carry. Thunderbird 2 can move a forty ton payload, and you must equip accordingly from the variety of useful items available, including Thunderbird 4, The Mole, weedkiller, earthquake bombs and scanning equipment, as well as extra fuel. For each ton of equipment you take you forfeit a hundred of the two thousand points with which you start. Moving a pointer labelled 'select' against the name of an item and pressing fire causes it to be loaded into Thunderbird 2.

After loading up, the action flips to the launch screen. In a blaze of pixels Thunderbird 1 takes off, followed by Thunderbird 2 -- unless it's overloaded, in which case the overweight message is flashed up and some of the equipment chosen has to be replaced.

The Egyptian tomb is split into many rooms, each bordered and split into a maze with character wide squares. Both Thunderbird 1 and Thunderbird 2 are in the tomb, though you can only control one at a time. The ships move in the four basic joystick directions, with the control being switched between the two via the fire button.

The idea of the game is to pass through the mazes to reach and rescue the scientists. The trouble is, some of the passages are blocked with coloured slabs of stone and others are not wide enough to allow Thunderbird 2 to pass. Blocks can be moved by nudging then with the craft. While red blocks can be shitted by either ship, Blue blocks can only be moved by Thunderbird 1 while green ones only respond to Thunderbird 2. At times the two ships have to co-operate closely to clear a path. A limiting factor introduced to make the game a bit more difficult is the inability to swap control when the ships are on adjacent screens: you have to be two screens away or on the same sheet as the other Thunderbird to change control.

Throughout the game, when you come onto a sheet where a piece of the equipment you've chosen to bring can be used, the relevant machine comes automatically into action.

Other little problems confront you later in the game -- it's not all block moving and passage clearing -- there's water to be passed and insects to be bypassed, to mention just a couple of hazards held in store, but there's also some treasure to be collected if you're in the mood. All the time you're in flight, fuel is being used, and while there are supplies to be found in the tomb, it's quite easy to run out. It's quite possible to get stuck on a screen as well, with the way forward blocked -- so you can save a game position out and reload later if you think you're about to make a fatal mistake.

To say I'm a Thunderbirds' fan would be an extreme understatement. I mean, it's what you'd expect a 12-year-old reviewer to watch, isn't it? The possibilities for a game based around the famous Garry Anderson television series are immense. But what do Firebird do? They let a potential blockbuster slip by and turn out something less promising but very good all the same. It just doesn't have the Thunderbird's ethos. Disappointments aside, Thunderbirds is good for a super silver game and is definitely one of Firebird's better releases. The logic problems require a fair bit of thought and the challenge is constant. I also like the method of control switching. This is essentially a good game lumbered with a title that doesn't match. I only hope that Firebird realise the enormous possibilities missed and decide to release some form of superior follow up.

When I saw Thunderbirds on the cassette box I didn't expect a game like this -- a series of logic problems rather than some tense action game based around the antics of my childhood heroes. As software goes it's alright, but there's not enough action to keep me enthralled for long. The puzzles are sufficiently good to keep the old grey matter ticking over for a while though. Perhaps the graphics and sound could have been better, but for its price Thunderbirds isn't a bad little game at all.

Graphics 47%
Nothing spectacular but sufficient.

Hookability 75%
Relatively simple to get into game.

Lastability 78%
Lots of devious screens and puzzles to solve.

Overall 77%
A very good arcade puzzle game that may not appeal to fans of the TV series.

A well-constructed game with some good options and 'nice' touches.