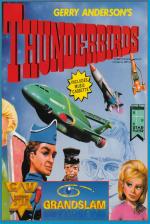 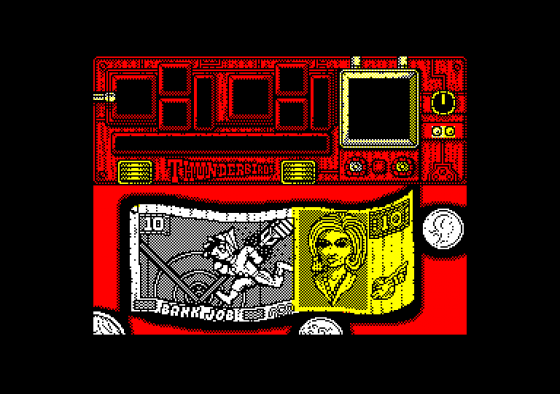 Tracy Island, playground of the rich and famous. This oasis in the sea is the domain of the fabulously wealthy Tracy clan and home of the mighty Thunderbirds known to the world as International Rescue.

John sends an urgent message from Thunderbird 5: some miners are trapped miles below the surface of the earth. The mine is flooding and the workers look sure to perish. Only a miracle can save them now. "And that's just what you might get," as Scott Tracy is fond of saying.

Brains is stationed in the mole - I.R.'s super tunnelling vehicle - and Alan flies TB2, carrying it to the scene. Before you can say "OK father", the mission begins. Brains has tunnelled his way to the bottom of the shaft, while Alan is topside. The plan is to rendezvous with the miners, Alan Tracy bringing the winch down from TB2, while Brains tries to avert flooding by repairing the pumping equipment. It's a tough task, with the clock to beat as well as the dangers of the mine itself. 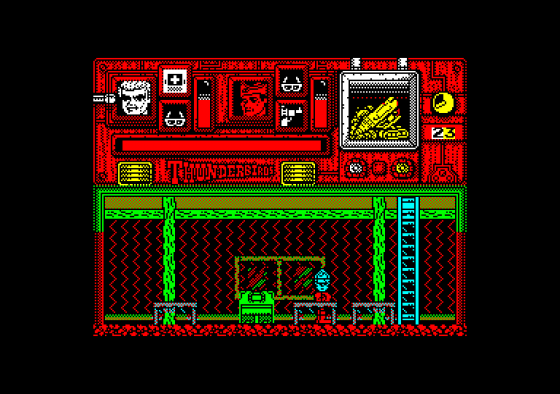 As they prepare to go in. they have the choice of two pieces of equipment that will help the rescue - a choice of everything from flash lights to guns (grease guns that is!). Each IR member is only able to hold two items at any one time, so success is dependent upon knowing where to 'dump' items for Ron (=later on). The mine is very dangerous, though, pitfalls (literally) awaiting Alan or Brains if you let them charge into the darkened (heavy playing hint) tunnels.

Brains is in the most immediate danger as he tries to stop the mine becoming an underground pool. He's forced to negotiate old, and very rickety, lifts and blocked passageways before he gets a chance to stop the water. Take too long and the guy with the specs takes an early bath - embarrassing as the whole IR team abort their mission and save him. Alan's main task is making his way quickly down to the miners. There are some helpful devices to speed him along - but again it's finding where they are and how to use them...

You control both characters at the same time toggling between pictures of them in action individually, which works like a 'cut' on TV. The game manages to retain the authentic Thunderbirds flavour: heads are too big, lip movements have nothing whatsoever to do with the message screen, and to see them swim is classic Anderson. It's with wobbly heads and silly walk the woodentops carry out their missions - just like the real (real?) thing but without the strings. 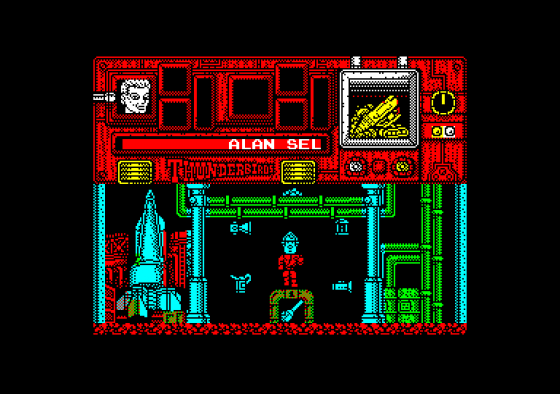 There are three further increasingly complex adventures for the Thundcrbirds to complete if the world is to be saved. Alan and Gordon are dispatched with TB2 and TB4 to the aid of the Oceanic Star, a submarine crippled by the Hood's sabotage. This time the main danger is not falling rocks, but radiation and water flowing through the vessel. The water needs to be evacuated, but most importantly the nuclear reactor must be shut down to avoid poisoning the ocean. Good grief, even Thunderbirds are green now!

Of course, being under the sea brings new difficulties such as the need for oxygen and the threat of attack from sharks, who strike before you can say F.A.B. Life is made all the more strenuous by a tighter time limit. TB4 stands by as a means of escape if things turn nasty, but the sub (and the environment) must be salvaged if you are to get the third and best stage...

The coffee pot communicator starts to buzz. Lady Penelope answers the secret communication from Jeff Tracy, head honcho on the Tracy ranch. The Worid Intelligence Executive accident report on the Oceanic Star has identified the culprit behind the mining of the sub. Whoever planted the mine also filmed TB2 at the scene, but red tape stops them giving IR the Hood's name. In order to act effectively all IR operations must be top secret, so Parker and Lady P. are asked to break into the bank and steal the file. Later, other Thundcrbirds can regain the tape.

As well as the guards and the security systems that are set to delay and capture the intrepid pair, there are also a number of puzzles that require action from both characters to solve. The tension reaches hair-tearing stage when, deep inside the vault with the clocking ebbing away, you're forced to try various combinations of switches to open doors or get tools.

It's well worth investing time doing some biographical research on the characters, because special personal skills are required to complete the mission. Can you work out how to rob one of the safest banks in the world? If you do, including part of the Thunderbirds drama is yours to attempt

Having established that it was your arch enemy, The Hood, who's been causing you all this grief, it's time to go and sort him out once and for all. You're not out to blow him limb from limb, however for Thunderbirds are far too nice to go around killing people. After all, it's impolite - and bad for the ratings. The Hood, though, has no such moral problems and is preparing to blackmail the world with a fiendishly evil plan. International Rescue are the world's only hope, but that hope is fading fast as time runs out.

The graphics are a Spectrum upgrade, as the programmers at 'Slam HQ decided that it would be more appropriate to have comic cartoon style than blocky mode 0. The screens are detailed, and plentiful, with great depth of field - with example, the Tracy's apparently walking between sets of pillars. The humorous elements are very strong, entirely replacing the need for violent action.

Thunderbirds cannot be called action-packed, but the game plays brilliantly, and has enough problems and puzzles to keep even Brains busy for weeks. Coming in a two cassette/disk pack with a free audio tape of all your favourite Thunderbirds themes, it's excellent value. When you've played until you can barely touch a joystick, get out your Thunderbirds and give your brain a thorough (and, for the older ones among us, a nostalgic) workout.

Although it's not as instantly attractive as some games I've seen, Thunderbirds has the kind of depth and long-term appeal that I find really rewarding. It seems like a game you won't tire of after a couple of days. And it's unlikely that any game this year will provide better value for money!

Finish Mine Menace (level one)

Grab Factor 89%
P. Everyone loves the Thunderbirds.
P. Mine menace is survivable and solvable.

This is a game you won't tire of after a couple of days... And it's unlikely that any game this year will provide better value for money! 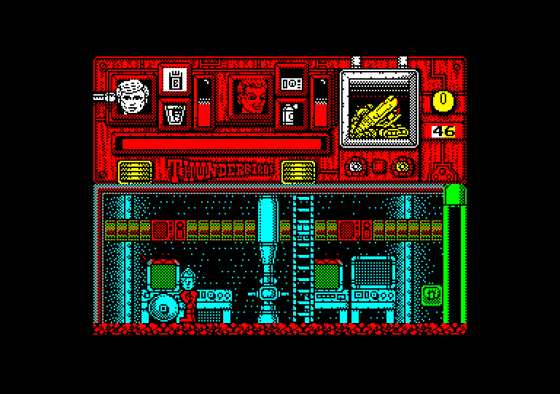