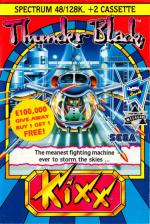 What have Noel Edmonds, Mike Smith and that bloke who flies the helicopter in Treasure Hunt got in common? That's right, they all fly helicopters.

And flying helicopters is what Thunder Blade is all about (luckily though with no sign of Noel Edmonds). The game consists of you flying about in a chopper, snooting and bombing things below as you go (Fire takes care of both of these). The first big stage is Skyscraper City, where you start with a bird's-eye view of your chopper, and solid 3D view of the buildings and tanks and other choppers below. Accelerating ahead, you either dive low (to increase the chances of hitting the tanks on the ground but also of getting hit back in return), or stay high (where you'll have more baddie choppers to contend with). Everything shrinks and grows very impressively as you get nearer/further away from them. However, it's all a little unpredictable because it's rather tricky to see the bullets heading towards you as they get obscured by your own sprite. You often find yourself plummeting back down to earth for no apparent (or avoidable) reason. The second and third parts of the first stage consist of the more familiar behind- view, again through skyscrapers, and then what's essentially a vertically-scrolling shoot-'em-up over an aircraft carrier. In both parts the graphics aren't quite as stunning as the 'first' bit, but the gameplay's a lot easier.

There are 4 large levels in all, each divided up into 3 parts as in the first, and some spooky fortress thingie right at the end which you have to blow up although admittedly I haven't got that far yet. In fact, I haven't even got off the first level. But I know a man who has, so I can tell you that the graphics are equally varied - including a sort of cavern thing you have to fly through at one point.

The game isn't particularly fast-moving and requires a bit more thought than certain games I could mention, so you may find it a bit frustrating at first, although I can guarantee that it get's loads better after a bit of practice. The difficulty is pitched just right too, so you'll probably be playing quite a long time as it's quite easy to progress and pretty damned addictive with it. I'm not too sure how long term we're talking here though, but never mind, eh? An ex-YS Megagame, and a complete snip for a mere 2 pounds 99 pence.

The difficulty is pitched just right... You'll probably be playing quite a long time as it's quite easy to progress and pretty damned addictive with it.