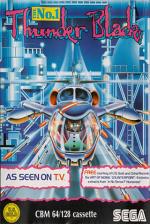 It's a good job that there are a lot of people in the world that live for solo battles against terrifying odds, else where would the computer games industry be? Anyway enough of this chat, on with the review...

Your country is being terrorised by an evil dictator: the dreaded General Swindells (an optician). His troops are spreading across the land from their headquarters, stomping the defending forces into the ground. But they haven't counted on... SUPER-ACE-BRILL-MEGA-BRAVE-AND-DARING-HELICOPTER-PILOT (yay). You take to the skies in your trusty chopper (...no, on second thoughts...), ready to deal a bit of rough justice to the dreaded General.

First, you must fly through the city (beginning from a bird's-eye view and switching to 3D) which is infested with enemy tanks and helicopters, immediately followed by an attack on the invaders' warship. Next comes the desert, with more enemy craft and many rock formations to dodge. The third level takes place over a river delta before entering the last stage in the refinery outside the enemy HQ.

You are armed with cannons and missiles (cannons for air targets and missiles for ground targets) and two backup helicopters (I wonder how they ship out the spare helicopters...? Never mind).

Can you make it through the enemy defences and save the world (again) or will you be a sensible coward and stay in bed?

I'd never played Thunder Blade when US Gold announced that they'd be converting the game, so I thought I better had. On seeing it, I thought "Oh, this is nice. Those plucky people at US Gold will have a hard task ahead of them in converting it - 3D like this is going to be tough to transfer to the 64". Now it's finally here, I can see that they really haven't made too bad a job of it.

The graphics are still a little jerky but the gameplay has kept the difficulty of the arcade original. The tunes are OK as well, if a little grating. So what can I say? Well it's quite a playable conversion - and much more respectable than certain other big names we've seen this year. Take a look.

When I heard that Chris Butler was undertaking the conversion of Thunder BladeSpace Harrier". Fortunately, it is - but not that much. There was many a snigger when the buildings on level one were seen to wobble like jelly as we flew past!

The game isn't too bad to play, but it's not really very good. A lot of the time I felt that the way that the enemies attacked you before you had chance to fire was unfair and the drifting missiles don't help. The 3D caverns on level two are quite exciting though but they're not ten quid's worth of exciting. I can see people getting a bit peeved about this...

Presentation 49%
Adequate controls, but extras only really consist of a score table.

Graphics 56%
Fair 3D, but some of the scenery wobbles like hell.

Hookability 66%
Good fun if you don't mind the unstable backdrops.

Lastability 52%
Not a lot of variety to induce lengthy gaming.

Overall 69%
Not bad, and it might work out cheaper than playing the arcade version.

Not bad, and it might work out cheaper than playing the arcade version.