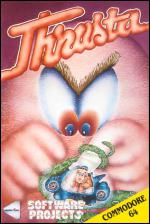 I never cease to marvel at the variants which software writers come up with. Here is a game in which you have two types of nasty to kill. The lesser types can be killed with a salvo from your cosmic blaster. To kill the big boys, you must drop a rock on them! The action takes place in a series of platforms and walls. You fly a little rocket and your raison d'etre is to destroy nasties or die. The big meanies hatch from eggs at the base of the screen and swarm upwards using a variety of tactics. You must splat each one to clear the screen. The junior aliens move about making life tedious and are replaced when killed. Your trusty rock starts at the top level and you shunt it about with a shove from your ship.

Generally the game design is of a good standard with clear, colourful sprites and good animation. Raster interrupts are used to give more than eight sprites, but this does give an irritating flicker.

A fun game which became rather boring after a few screens.

A fun game which became rather boring after a few screens.