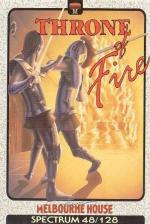 At last! After much speculation, trepidation and even desperation, Mike Singleton has finally completed a game! It's not the much publicised Dark Sceptre or Star Trek, but Throne Of Fire, designed for Melbourne House. And believe me, it's hot stuff!

The storyline is this - you're one of three princes who all, naturally enough, want to be king of the castle. Each amasses his followers and races to the throne room to collect the crown. You've got to get there first without being killed in the process. Simple, you may say. Wrong! The other princes are just as hell-bent on mangling your chances of knighthood. So you've got to use your forces carefully to avoid the other players and protect your prince. One good idea is to stow your prince somewhere safe and use a plain ordinary foot-soldier tO do all the dirty work - which means if he dies, you don't - yet.

The castle itself is circular, so if you continue one direction long enough, you'll wind up back at the start. There are also several levels and towers to negotiate. The screen's divided into two sections a la Top Gun, but as there are always three princes this means that until someone (usually you) dies, one prince is hanging around unseen, and is usually him who does you in! You can play against the computer, which then looks after the other two princes, or in two-player mode, with the computer taking prince number three.

The gameplay is fast and furious, with superb animation (as in all Mike Singleton games) and little details like the fireplace and the chandelier which both flicker realistically. There are sword fights you have to survive if you're to have any chance of winning, and these too are well animated - there's even an effective clunk when you engage in hand to hand combat with your foe. You start with ten followers per prince, but as you fight the other players or the King's Guard, who are an independent (are you?) force protecting the throne room, your numbers go down. In the two top corners of the screen your heart, and that of your opponent, pumps away, indicating how much energy you have left. The weaker you get, the faster your heart will pump, and if you're caught in a fight and lose, your heart splits in two and a curtain of blood dribbles gorily down your half of the screen. Bleeuugh!

The only drawback is that if you're playing in one player mode, and you die, the other two computer-controlled princes carry on with the game until one of them wins. This gets a bit boring, especially if you're foolish and get mashed early on in the game. I completed it my first time in two player mode, but I haven't been so successful in one player. Almost, but not quite! It's great fun though, and very good to play - I really enjoyed it. As games go, Mike, it was worth the wait!

Great fun, and very good to play - I really enjoyed it and, although I completed it my first time in two player mode, I haven't been so successful in one player.