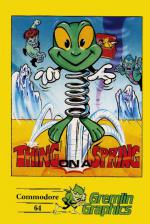 Remember Gremlin? Yeah, course you do. You know the guys - Potty Pigeon, Wanted: Monty Mole and Suicide Expre... Oh! Them! Yes, them. And you thought they weren't going to do anything else on the C64 ever again, didn't you? Well you're wrong! What do you think this is then? Thing on a Spring, that's what. Yes, after a rather comatose finish to 84, Gremlin make a rather delayed, but welcome return to your favourite micro. Thing On A Spring features a brand new computer star who goes by the name of Thing (oh he of the rather strange game title).

The evil toy Goblin (Boo! Hiss!) has cast spells on the children's toys and ordered them to come to his factory, deep in the earth (the toys, not the kids, stupid!) On no! Golly! etc ... But wait! Don't despair! Thing is hair! (Yay! Cheers!) Thing will put a stop to this foul Goblin. How? By collecting nine pieces of a jigsaw puzzle which are to be found about the factory. When correctly assembled, these pieces will give Thing a clue as to how he can finally stop the Goblin's goings on.

Things are not so simple for our hero, though. Throughout the factory are a multitude of devious traps - a mess left by the malicious Goblin. Also left about the factory are five switches. Once collected, a switch will activate certain functions through the factory, like there are some 'escalators' which can't be used until you have the correct switch.

The factory is composed of four levels of several screens length. The levels are joined by a lift which cannot be used until the correct switch is collected. The floor you are currently on is indicated below your score. Each of the levels contains four rooms of around four screens width. The screen scrolls left/right incredibly smoothly when moving through these rooms and up/down when using the lift (look, no split screen glitch)! The sixteen rooms each contain a mixture of platforms, escalators, traps, 'spring-boards', nasties and a multitude of other things. They are separated by 'tubes' which contain blocks to be skilfully manoeuvred and nasties to avoid as you pass through them.

There are a large number of different ghouls and guards patrolling the factory and they move around the screen in unpredictable, predictable patterns. They must be avoided at all costs, because if Thing should be touched by any one of them he will lose oil and will start to rust up. The amount of oil remaining is shown in a sort of thermometer at the top or bottom of the screen (depending on where Thing is). If Thing losses all of his oil then his will totally rust up and his mission will have failed. Oil can be replenished, though, by collecting one of the oil cans lying around.

A score is kept at the top of the screen and increases by one point every second Thing remains springy. Other points are gained when collecting a piece of jigsaw, a can of oil or switch, and a further bonus is given on successfully disposing of the Goblin.

A lengthy piece of music plays throughout the game along with various and varied sound FX, and a music on/off option exists for the Noise Abatement Society members among you. Other options are a restart function (very useful!) and the ability to redefine your own keys.

Thing On A Spring has incredible instant appeal due to the exceptional piece of music (I've never heard anything so marvellous on the C64), great sound FX and the excellent character of the Thing itself (he really is cute - he could well become more popular than Rockford)! The large number of different nasties floating about the place all have wonderful definition and animation, and colour is put to good use throughout the game.

Despite using a platform game on the surface, Thing has some brilliant new features and quirks. Amongst these features is the control of Thing, which is tricky and frustrating to get used to at first, but soon becomes second nature. The traps are another great new innovation and prove just as frustrating as the control, until you guys suss them. Thing has so many good things going for it that I find it impossible to fault it in any way. I eagerly await some form of equally enjoyable and absorbing follow-up.

The main character of Thing On A Spring sets new standards in computer character cuteness (sorry Rockford, you're on your way out), the googly-eyed Thing is brilliant as he bounces about the screen, springing off the walls, ceiling and platforms. Luckily, the game is of the same high standard as its main character, and although being essentially a platform variant, offers many puzzles and original touches. The scenery is very colourful with smooth scrolling, and there are all sorts of nicely animated hostiles munging about. The sound is unbelievable, I won't describe it but just wait until you hear it; words fail. The game strikes a happy medium between being easy to get into and difficult to solve, but beware, there are some really mean touches that will have you tearing your hair out.

Lastability 91%
It's more powerful than super-glue.

Value For Money 92%
Amazing game at a good price.