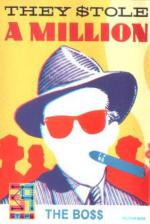 This game comes in two parts. In the first, you pick one of five targets. The money made from one job is then re-invested in the next. A raid on the local coin dealers should net you a few thousand. This can then be used to buy the information you need, and a team of crack specialists, for the art gallery job.

There is a rogue's gallery of 18 hoodlums. Each has a dossier on their past experience, but the nifty gritty is in the last page of information: how much they cost to hire, how much of the 'take' do they expect and what are their skills. This determines how long they'll take to pick locks, dis-able alarms or blow a safe.

At this stage of the game there is lots of information you can buy on the target. Most of this is vital stuff - like where the alarms are, and what you are after. If you just go in blind and whip everything, the 'fence' won't give you the full value of the items - whatever happened to honour among thieves!

Once you're happy with your team, load the next section of the game. The raid must now be planned. This means telling each member of the team exactly what to do. This is all icon-driven. First toggle between the members of your team, select one, and then tell him where to move and what to do. Most actions take time. It is therefore essential to make sure that the actions of the various team members are co-ordinated so that, for instance, two men don't try going through the same door from opposite sides, or no-one breaks in to an alarmed case before the alarm has been dealt with.

Once a 'track' for each crook has been made, the program has extensive editing facilities. This allows you to re-orgarlse the raid to make more efficient use of your men. Also at higher levels, you will have to cope with security men on regular patrols, so you must time the paths so as not to arouse their suspicions.

Last but not least, to the raid itself. The men go through their pre-ordained patterns. Messages come up if there are problems. (i.e.locked doors, 'the fifth' etc.). During the raid, you control the boss (who can do a bit of pilfering himself), or act as look-out. He can assist members of the gang who get in trouble, abort the raid and return to the planning stage, or tell the men to freeze when a police patrol goes past.

After all this, the dosh is split up, and you load up the first part of the game again, just in time to go for another job.

I had great fun playing this. The whole idea of the game is very original, and extremely Interesting to play. If you want a fast action game, then you won't like They Stole A Million as it requires lots a brain work and a considerable amount of note making. The menu system of choosing your options is easy to get used to and Is very quick to use. The graphics, during the robbery, are very smooth and detailed. Definitely one for those cold winter evenings! And much safer than the real thing (I would think!)

Generally I really dislike this sort of game as there is often little or no fun involved in playing them. They Stole A Million however has been written and presented in such a way that even mere mortal arcade freaks can actually play it and enjoy it. The first part is a bit boring, flicking through masses of information windows can get very tedious if you haven't really got into the spirit of the game. The second lottery stage really is good fun. You've got to be on the ball at all times. Go and buy it.

Gosh, this game is good! The windowing system is superbly done, and the whole game is definitely one that has been put together very well indeed. The idea is a good one, and one that I can't say I've seen before. Presentation is of a very high calibre, and playability-wise, I find it hard to fault. Colourful, and graphically very good, They Stole A Million is pleasant on both the eyes and the brain. I usually dislike strategy games, but this one is certainly well worthwhile. I like it.

The first part is a bit boring, the second lottery stage really is good fun. You've got to be on the ball at all times. Go and buy it.