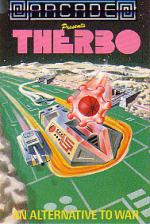 The game is a bit like space age football. Written with some well-drawn graphics, you are presented with a wide corridor which runs vertically across the screen. At each end is a goal, one is yours and the other is the computer's.

The ball is replaced by a flaming cursor which is fired towards your goal. To stop it, there are strategically placed thrusters which fire little thingies across the corridor and you have to hit the cursor and knock it to the side so it blows up.

To assist your cursor towad the computer's goal, you also have a tank which fires missiles. If the computer's cursor is nearing your goal and you think you cannot stop it in time you can press the Mesmo button which blows everything up. These can only be used three times though.

Added to this there are polarity missiles which may also be fired at you as they approach. You can protect yourself by guessing its polarity. If it carries a negative charge you can send out a positive charge to blow it up.

There are thirteen keys to operate, some of which can be handled by a joystick.

To tell you the truth, I was not impressed. The graphics are good but the game itself is boring. I even showed it to a friend who also confirmed my views.

To tell you the truth, I was not impressed. The graphics are good but the game itself is boring.