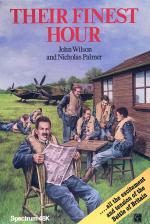 Nehvah, in the field of Spectrum wargaming, has so much been put into so little. Century surprised everyone with the flash icons and ease of play of its Fourth Protocol and it has used many of the same techniques to make its Battle Of Britain simulation one of the most playable and realistic wargames ever. Unlike the bulk of the genre, Their Finest Hour plays smoothly and is all action. There's little of the tedious taking turns to alter this, allocate that, update the other and whatever.

You play in 'real time', the action only stopping so that you can read reports and the constant stream of mostly abusive memos from the Commander-in-Chief or respond to questions such as the way you want to handle particular dogfights. The speed of play is adjustable by setting a pulse rate - set it slow and you get more time to consider your options than they did in 1940, set it fast and it all happens so quickly, it's almost an arcade game. Even better, holding down the S key hurries the game along so you can rush through the 'boring' bits and take more care over the crucial battles.

The game's high on realism - the lads even get tired and careless if you leave 'em up too long. You've got to spread the load throughout your forces and make sure those the front line are getting their fair share of rest, repairs and support from other squadrons. But the simulation is scaled down from history - you've only got Spits and Hurricanes. As it is, you're gonna have to play loads of one-day games until you've got the map fixed in your head and don't have to think about which dot is where before you can attempt the real thing.

It may not have 3D graphics , the rattle of machine guns and thunder of ack-ack guns. But it does have the claustrophobia and almost impossible odds of 1940. I lost again and again; I still can't beat off the might of the Luftwaffe. And I still don't know how they did it in 1940.

It may not have 3D graphics, the rattle of machine guns and thunder of ack-ack guns. But it does have the claustrophobia and almost impossible odds of 1940.