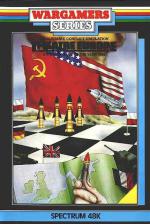 The hawks leave their high perches in the Middle East and prepare the battle grounds of Europe for what could be the final conflict.

Warsaw Pact and NATO Alliance forces are ready to move against each other. Russia and its allies turn their attention to West Germany while NATO is intent on stopping any breach of its borders.

Theatre Europe from PSS looks initially a dauntingly complex war game simulation with its crowded map and frequent, but optional arcade sequences. Yet, once you get into it it's surprisingly easy to handle, mainly because it uses simple menus and all the options are selected with joystick or cursor keys.

Like most such games you can either play against the computer or another person. And you choose whether you control the Warsaw Pact or NATO forces. Alternatively, you can watch as the simulation plays itself.

Play is rather like a board game. You take your turn, give your instructions to your forces and watch the outcome. The whole thing is all about capture of territory. Main thrusts are made on the screen map of Europe over which you will spend a great deal of time pondering. A square cursor is used to select units - red for the Ruskies and true blue for Ronnie.

The first part of your go is the Movement Phase where you land troops, amphibious vehicles and aircraft. Press fire over a troop marker, press fire again and move the cursor to an area within the bounds the game dictates. That's how easy the game mechanics are. The type of terrain is taken into account when you move, for instance, it will take longer to march over mountains than over flat lands.

Next in your go is the Combat Phase. Any unit which is next to an enemy flag can take part in the fighting and you can even set two of your units on to one of the enemy's. The four methods of attack range from infantry fire through to missiles and airborne bombing. Take the cursor and keep it on your target while you press the fire button. It is easy to hit a target with machine gun fire but the damage inflicted is obviously less than with a missile! You can also select to play out the Attack Phase in a short arcade style sequence.

During the first battle round you have to decide whether to launch a chemical attack on a city or troop station. If you answer 'yes' immediately you'll be branded as irresponsible and the option will be taken away forever.

Don't think - if you're playing against the computer - your opposite number won't take the initiative. There's a disturbing lack of morals shown on both sides in this game and NATO is willing to break treaties just as easily as Russia.

If you're playing the simulation at an advanced level - if you get good enough - there are a series of special missions in which your troops take part.

The first is Assault Breaker, an air mission which is used to attack enemy ground units. The other missions are land-based. Deep Strike takes your forces into the heart of the enemy's command structure. If it works you deal a massive blow to your opponent. Interdiction may lead to the late arrival of enemy troops and could stop enemy Assault Breakers but it runs the risk of nuclear war. Finally, iron Snake attacks the enemy's rail networks, stopping supplies getting through to famished troops.

Nuclear war is an ever-present threat in the simulation. Should you choose the nuclear option you must know the authorisation code - it only has to be entered once in the simulation and then you're ready for countdown. A single strategic nuclear attack can be launched on a city or enemy unit.

Any such attack brings nuclear reprisals and the likelihood of total global nuclear war.

You can unleash the full might of your nuclear arsenal by calling Fire-Plan Warm Puppy into action. All your missiles will be shown on the screen together with those of the enemy. They cross in the middle and hit their targets.

You lose your job as a commander, and your life as well.

Theatre Europe is a brilliant, if chilling, simulation. It has all the facets of a war game and all the realism of what a final conflict scenario could mean.

Should PSS make a game out of something so serious? That is certainly open to debate. But the way it treats the nuclear issue really does bring home the staggering proportions and tragedy of a nuclear disaster in a graphic way.

An opportunity to play out the armageddon scenario. Chilling realism with graphic simplicity.

An opportunity to play out the armageddon scenario. Chilling realism with graphic simplicity.