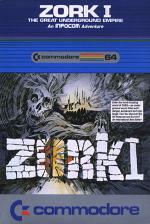 For this month's look at the disk-based adventures, the White Wizard has turned his wand to Infocom's excellent "Zork" series, as marketed by Commodore in the UK. Be prepared for more Infocom information next month, but for now...

The Zork series have generally been regarded as the text adventures for some time now and have been personal favourites of mine for just as long. Unfortunately, due an initial high price, non-availability, and the fact that they are on disk only, these classics have been overlooked by many an intrepid adventurer.

All Infocom adventures are text only but do not suffer because of this, as the quality and depth of the location descriptions are so good and convincing that you don't need graphics. Something else that puts Infocom adventures head and shoulders above other text adventures is the brilliant interpreter used and the incredible array of responses. Combined, these mean you can almost have a full-blown conversation with an Infocom adventure! You can type in a complete sentence and still receive a coherent and sensible reply or result, or both.

The three Zorks are all interlinked adventures in as much as the end of Zork leads to the beginning of Zork II and then on to III, but each can be played as a separate game without losing any individual appeal.

Zork allows you to explore the Great Underground Empire of Zork and all its secrets. You start outside an old, dilapidated house next to a forest. Getting into, and exploring, the rather small house leads to more than a lantern and a sword, for it is the gateway to the Underground Empire itself!

Below ground you will encounter a rather nasty troll, an even nastier thief, and Hades itself with its foul inhabitants! There is a tricky, twisty maze holding several secrets within its multitude of passages. Then there's the great dam, needing careful attention - but does it still work?

There are many magical things in Zork, all manufactured by a legendary company known as Frobozz. These devices are all extremely useful and it's necessary to figure out their uses to complete the game. A wealth of other objects and treasures are to be found, amongst them the jewel encrusted egg whose secret has been the breaking point of many a fearless explorer. All treasures must be taken back to the house and places in the trophy cabinet therein. Collecting all twenty treasures and successfully returning them to the case will earn you maximum points and finish the game ... Or will it?

Zork is packed full of excellent and atmospheric descriptions, some superb fight sequences, responses and, above all, a very wide vocabulary. Puzzles are numerous, tough and sometimes humorous, and overall make this a difficult and enjoyable adventure to crack.

Zork II, as stated previously, starts off where Zork finished and lying at your feet are to be found a strangely familiar sword and lamp. Any major similarities, however, stop there, since Zork II deals more with magic and has less locations but more depth. Again, location descriptions are lengthy and detailed, and unsurpassed by any other brand of adventure, as is the case with the massive and impressive vocabulary. As with Zork, there are numerous objects to be found and manipulated, but there are less treasures to collect and the way that they are used to finish the game is more devious.

The locations range from a gazebo in a beautiful garden (complete with an elusive unicorn), to mist-filled rooms and a rather volatile volcano. Once a small problem involving a large bucket is solved, some interesting and dynamic cakes are to be found along with a very useful, but servile, robot (manufactured by Frobozz of course). An extremely bored dragon lurks below ground, who takes a bit of persuading to move. This leads to the discovery of many other items, amongst them a beautiful princess, some more treasures, and more trouble. There is a strange maze to figure out, the solution to which is in fact not that obvious due to Americanisms on the part of the programmers (well, they do come from the United States of America).

Occasionally the Wizard of Frobozz (a very dear friend of mine) makes an appearance and casts a spell upon you, which always begins with an 'F'. This usually affects you in some way, so it's best to wait around for a while until eventually it wears off. The tables turn though, when later you acquire the self same wand and put it to good use. Finishing Zork II is quite a bit trickier than Zork I, but follows the pattern with a similar sort of humour, quality, and excellent atmosphere.

Zork III is the finale of the trio and starts effectively where Zork II ends and its quite a bit different from its predecessors in both scoring and play. The object of Zork III is to become the dungeon master and rule Frobozz Enterprises Unlimited. This requires considerably more skill than the other Zorks, and you can't buy your way to the top here! Whereas before scoring was into hundreds of points, in Zork III you can only get a maximum of seven points because they are only awarded for certain events.

Zork III combines a few of the locations and objects from the first two with a totally new and original scenario. The lamp is here as well as the sword, which you can't take at the start since it has become embedded in rock and so are several other objects. There is a bit more magic involved, and in general the puzzles are a lot harder and, in some cases, more obscure than before. The locations number fewer than Zork II but are as highly detailed and atmospheric, as usual blending well with Infocom's excellent parser and responses.

This is a lot harder to complete than the other two Zorks, but is by no means less fun to play. All three adventures offer such exceptionally high quality at such ridiculously low price (for disk games), and should be snapped up instantly by those amongst you who have yet to sample such exquisite delights. The White Wizard highly recommends any of the Infocom range, especially the Zorks, and I feel I cannot do justice to these excellent examples of adventure in this small space. If you don't own a disk drive and you get bitten by an Infocom adventure you won't want to play anything else, as the bug that is in many people's blood will have finally found its way into yours.

When you get bitten by an Infocom adventure you won't want to play anything else...!