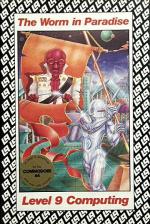 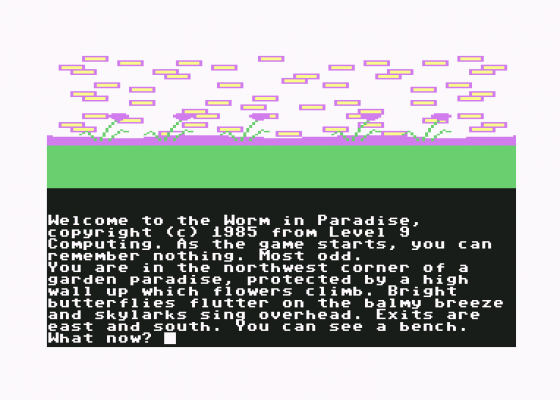 This game has been eagerly awaited for many different reasons. First, it's the final episode in the Silicon Dream Trilogy, which began way back in 1984 with Snowball. Secondly, the game not only rounds off the series, but does so using Level 9's new adventure system. You can read about the new system elsewhere on this page, but what about the plot?

The instructions aren't that clear on your objective, except to say that when you start the game you don't know who you are or what you're up to. In my case, this ignorance lasted for several hours! Finding yourself in the Pleasure Dome of Enoch, capital city of Eden, you first wander around checking out the shops, casino and other amusements, before moving out into the city and trying to find your way around. From the very moment that you start the game, you'll find yourself involved with all sorts of gadgets and gimmicks, all very well thought out, and some - like the One Armed Bandit in the Casino - very entertaining.

There's a very complicated system of roundabouts and 'ped-ways' connecting the different city locations, but luckily they're fairly easily mapped, and after a while you begin to feel like a native Edener out on holiday. The biggest problem is mastering the main Eden Transport System, which is a colour-coded set-up with over 40 million possible destinations! If you get really stuck, send for a crib sheet to Level 9, who've written a special BASIC program to help you work out how to get to where you want to go! I think there's going to be a huge demand for it! 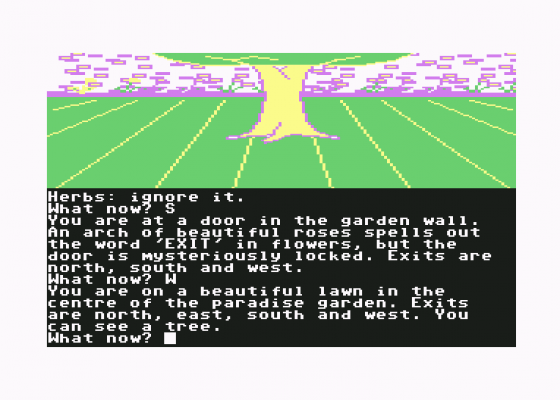 The society on Eden is pretty sick - everything's run by robots for the benefit of humans, which means that the humans are a rather spineless lot. The eventual aim of the game is to work your way up in society, get a decent job, and then, when you've reached the top, set about changing the world.

While you play you'll come across the Fuzbots, who regularly inspect you and will fine you for any misdemeanour you may have committed. You'll also discover that people on Eden live for ever (or almost), because they simply replace their worn-out limbs with someone else's. If you don't behave, you'll find that you'll be doing most of the supplying! The most important thing to do is keep a check on your expenditure - being in debt can cost you literally an arm and a leg!

You'll also - if you're sensible - get yourself a companion in the form of a Dagget - an electronic dog. This battery-driven cutie spends most the game jumping up your leg. I suppose it has to make the most of it - considering the price of a Dagget, you're unlikely to have a leg for long after you've paid for it! 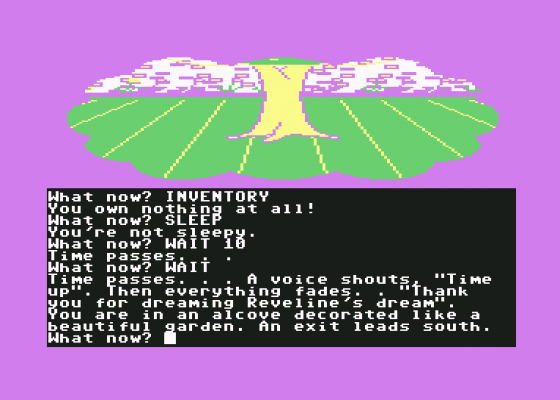 There are over 220 locations, all with graphics, and I reckon that this game is going to be responsible for more sleepless nights than Nescafe, insomnia and indigestion put together! Definitely worth trading-in a limb for.

If Level 9 are going to stay at the top of the adventure league, they've got to come up with something pretty special - particularly in these days when more people are buying disk drives, and getting access to games like Hitchhikers and Zork. Have they succeeded?

Things have certainly come a long way since Snowball. This was a text-only game that was followed by Return To Eden, introducing the pleasures of graphics for the first time in a Level 9 game. Now there's The Worm In Paradise, with a load of new features that make it the most playable Level 9 game yet. 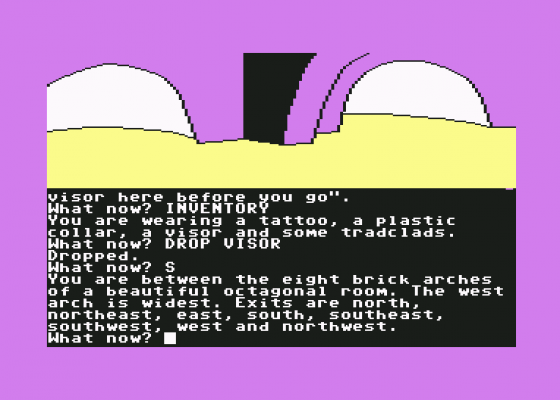 First, you get multi-tasking graphics. This means that you can enter text even while the pictures are still drawing. Of course it does mean that the graphics are slowed down slightly, but the big advantage is that you can move around quickly without having to turn off the pictures altogether. And in this game, believe me, you'll be doing a lot of moving around - and not always in the direction you want to go, either!

Second, you get a vastly increased vocabulary. Level 9 are claiming a thousand words, and on the basis of a couple of days playing I won't quibble with that. I certainty didn't experience any vocabulary problems on my trips round planet Eden.

However, the increased vocabulary is only half the story. The text-compression system used in Worm means that each word (including all the text of the location descriptions) is stored in a large dictionary. Your inputs are matched against the dictionary and if your input doesn't make sense, you'll be told exactly why not.

For example, if you see an interesting flower which is, in fact, just there as part of the scenery, and try to 'Examine the flower', the program will tell you that the flower is 'just scenery', or 'not important'. In effect, therefore, the vocabulary is a lot larger than 1,000 words - in fact, the game will accept almost any word that it uses itself. So perhaps it's more accurate to say that the program has a significant vocabulary of 1,000 words. That, just for the record, is better than any other cassette-based game on the market, and even better than some of the earlier Infocom games (Zork, for example).

Finally, not only does Worm understand more words, it also allows you to use them in many different ways - far more than in earlier Level 9 games. You can have multiple inputs connected by AND, THEN, commas and full stops. You can use prepositions like on and at, and even use it to refer to a previously mentioned noun.

There is, however, one notable omission from this new system, and that's 'interactive characters'. You still can't talk to other characters in the story, and although there are other people about who move around, and even address you from time to time, there's no provision in the program for interacting with them, other than handing over objects or money. This is a pity, the more so since other contemporary games (Lord Of The Rings in particular, and Infocom games of course) are becoming quite strong in this area. Level 9 will have to watch out that they aren't left too far behind, since characters can add a lot to a game, even if they are fairly primitive - take The Hobbit, for example.

Over 220 locations, all with graphics... This game is going to be responsible for more sleepless nights than Nescafe, insomnia and indigestion put together! 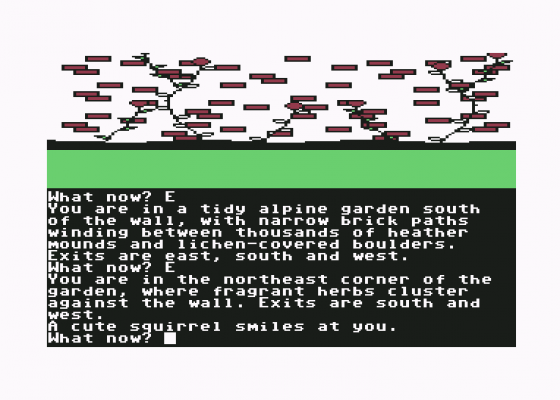 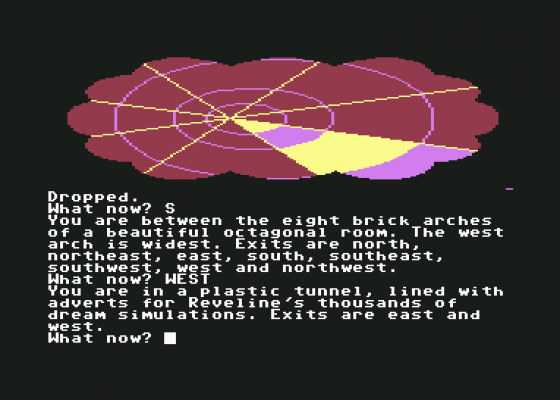 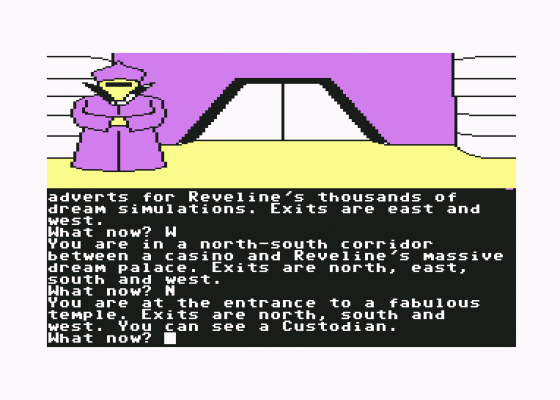 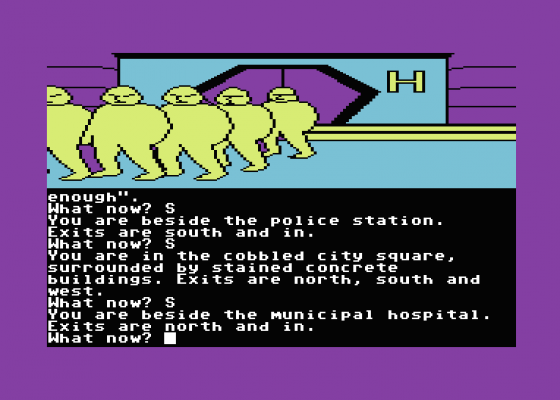 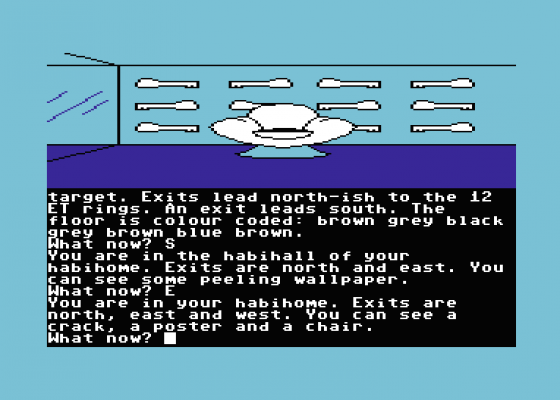