Published in Your Sinclair #66 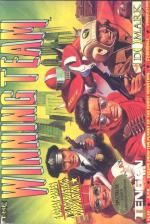 A compilation called The Winning Team, eh? That might be pre-empting things a bit. Let's have a look.

Here we have a 3D isometric shoot-'em-up, with the welcome addition of a simultaneous 2-player mode so you and a chum can work together blasting baddies and rescuing hostages. At first, it seems like a bit of a laff The 3D view and crisp clear graphics work a treat, and the play area appears vast as each level is divided up into platforms. The only snag is that nothing much changes - I think 'samey' is the word I'm looking for because you're bound to find it pretty tedious after a while. But it's still fun while it lasts. Verdict: 80%

The coin-op version of this was a bit of a hit (at least I saw someone playing it at a service station once) and rather surprisingly it converted quite well to the Speccy. You're Officer Bob, and you have to drive around in your car (in an annoying large-chunk-scrolling sort of way) arresting naughty people. The trouble is that the original arcade was a tad dull, so unfortunately this is a bit too. Verdict: 69%

Not to confused with The Vindicator, of course, which was this rather good multiparter beat/shoot/drive-'em-up. This one's a scroll-around-in-a-tank-'em-up with the unfortunate problem that it's crap. It's just all so slow and unexciting that. well, you just won't want to play it. Verdict: 40%

Ah, this is more like it. Klax is a member of the completely simple yet fiendishly addictive puzzle game club, and was simply corkeroony on all formats. Lots of coloured bricks come at you (with a nice tumbling sort of effect) and you have to catch them in this thingy and drop them to this other thingy, forming specific patterns to score certain points (and cause the respective bricks to vanish). That's it really - simple but brilliant, and although it's not quite up to Tetris standards, it still comes pretty damn close. Verdict: 85%

Let's face it, nobody has the slightest idea how American football works, no matter how much they boast about it. So Cyberball, a futuristic variation of the game (featuring robots instead) is unsurprisingly, rather tricky to play. Add to that the fact that it's jerky with manky graphics and you've probably got it sussed. The two-player option adds some excitement but it's still all a bit confusing for its own good. Verdict: 69%

And there we go - two rather poor sports sims, a pathetic shoot-'em-up, a brilliant puzzle game and the original APB. It's okay, but you could certainly buy five better (re-released) bargs for the price. (Any help?)

A not terribly inspiring compilation, with just one brilliant and one above-average game to its merit.

A not terribly inspiring compilation, with just one brilliant and one above-average game to its merit.