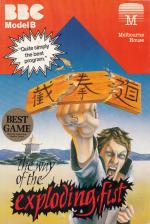 "Ah so young grasshopper, you have come to learn the way of the exploding fist, it is a hard and rigorous way, and those who do not master the old ways are shown no mercy."

You still want to play? Good, because The Way Of The Exploding Fist is an excellent game full of surprises and features.

Armed with my trusty joystick I set out from "novice" and many hours later, competed my way up the fifth dan (about halfway), now nonchalantly humming the music (which cannot be turned off once in the game!) I was defeated by an expert in Fist (why does that remind me of a Monty Python sketch?), "ahhh sooo!", I screamed, and prepared myself for another good few hours of play.

Fist is not exactly the same as the arcade versions, but it has a good stab at it, if you are familiar with this kind of game, then imagine no climbing over ladders and walls and one opponent at a time, and I think you have a good idea of what the game has to offer.

Keyboard play is possible, but quite frankly I don't recommend it, hunched up in one corner of the keyboard isn't my idea of comfortable play, but it does allow the option of one or two players on keyboard (yes, you can inflict the most horrible wounds on your best friend without even touching) or even one player on joystick and another on keybord, should you want the two player option.

There are eight basic moves in this game, all of which are reversed automatically, should you jump behind your opponent to give him one of those kidney-rupturing jabs, the mater, who judges whether the moves are well-executed or not awards you either a half point or a full point depending on distance from your opponent whilst punching and also movements before and after striking.

In all, Fist is a satisfying game, the graphics are nice and although the screen is a little uninspiring (a few more pagodas please!) and the music accompaniment gets really monotonous with no sound on/off key. It is a highly enjoyable game, if you like the arcade versions.