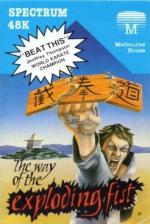 Uttering a bloodcurdling ki-ai, the black-robed ninja hurled his muscled body against the evil sensei of Mel-Bon ryu. A series of percussive kites was countered by the feared 'attack of the astral Ho-Bits'.

Reeling from the force, the ninja leaped instantly into the air and brought his calloused feet, like twin axes, down on his opponent's joystick. In a wail of agony the sensei, Spectrum, Ferguson 12" and all went down in a mess of black wires, crushed cartilage and broken Quickshot II.

Melbourne House has gotten all bloodthirsty for its latest, a simulation of karate which offers 16 different moves and an extremely tough series of opponents.

Everything is joystick controlled, and you'll find a stick essential for any chance of success. The moves allowed are split into two sets. The normal eight joystick positions translate into movement backwards and forwards, two punches, crouching, jumping and somersaults, forward and back.

With the fire button held down, the eight positions become more aggressive. Three kicks, high, low and mid, form the basic arsenal, with a spectacular flying kick thrown in. You can also sweep from the crouching position forwards and back, or produce the well-known roundhouse kick, which involves spinning round and catching the enemy on the jaw with the back of the heel. There's also a straight back-kick.

The key to the game's addictive playability is the intelligent way those actions are planned, so that once you are familiar with the controls, the movements are logical and instinctive.

Graphics are pleasing too. The animation of the two fighters is near perfect, with a satisfying crunch as foot connects with bone. It's sufficiently sophisticated for you to be able to hit your opponent while he's in mid-execution of a move, allowing for feinting tactics. Virtually all the moves can be aborted halfway through and turned into something else; in short, the variety of strategy possible is remarkable for an apparently simple arcade game.

The backdrop of each round is suitably Japanese in flavour. A short, balding instructor looks on as you fight under the cherry blossom, or across the tatami mats.

You start as a novice and must win two rounds to progress to first Dan, and so through to tenth. The first round is relatively easy, and provides good practice, but life gets tougher, and you need all your cunning to survive for long at higher levels. Each round is scored, and has a time limit. You must get two full points to win, symbolized by yin-yang circles on the screen. To score a full point you need to be perfect in your attack.

As a sports simulation, this is one of the finest and most realistic we have seen. As an arcade game, it's addictive and pacy. As a product, it's clearly destined for the top.

As a sports simulation, this is one of the finest and most realistic we have seen. As an arcade game, it's addictive and pacy. As a product, it's clearly destined for the top.