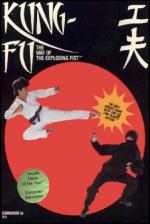 The popular arcade game Karate Champ explodes onto your screen in the form of this excellent new release from Melbourne House.

True to its arcade counterpart, Exploding Fist puts you in control of a budding martial arts expert, complete with all (well most) of his skills. By exploiting these skills to their full, you must fight your way up through several levels, to the exalted ranks of the Shaolin Monk (slightly more aggressive than your average church-goer)!

The game takes place over four scenic backdrops against either a computer-, or human-controlled opponent. To get closer towards your goal, you need to show that you are worthy (by knocking the living excrement out of the other player) over a series of 'bouts'. To win a bout you need to knock down the other player enough times. Depending on how well you do this, you are given 'points' in the form of Yin Yangs and a score depending on the choice of manoeuvre, which are displayed at the top of the screen. For example, a poorly executed, but effective, kick, punch etc will earn you a measly half point and will add a hundred points to your overall score, whereas a good kick will earn you a full point and a couple of hundred points to the overall score.

Should you prove the better man after two full bouts, you will move up a level to a new backdrop and a tougher adversary. Each of these levels is known as a Dan (as in Karate) and is an indication, along with your score, as to how well you're doing. After every fourth screen (or multiple thereof) there is a surprise in store, in the form of a small task to earn a bonus. What are those surprises? Sorry we'll leave it up to you to find out!

The demo plays constantly (unless you are actually playing a game of course) and a hi-score table for the top five scores. An oriental tune is played throughout the demo and a different one on the one-player option, the two-player option and the hi-score table. Other sound is in the form of digitised AAARGH!s, OOOF!s, C-RACK!s and THUD!s when fighting, and should they annoy or physically upset you, they can be turned off.

Joystick control is quite sophisticated, allowing 15 actions to be executed in addition to straightforward left/right movement. There are 8 kicks, 3 punches, 2 somersaults, a crouch/leap and a basic blocking movement. All the kicks are controlled by fire and a direction.

1. The Block This occurs automatically if you back off while your opponent is making an aggressive move. Moving the joystick to neutral releases the blocking stance.

2. Jump Kick The classic karate flying kick, most suitable against a standing opponent who is not blocking. Best defense is a crouch or a return jump kick, but you've got to be fast!

3. High Kick & Mid Kick Aggressive, hard kicks best defended by a block, back somersault, or, if quick enough, by running away!

4. Short Jab Kick Useful is close combat because it is very fast to do and doesn't leave you so open to a counter attack.

5. Sweep There are 2 - forward and backward. This is an aggressive crouch where the leg sweeps round. The backward sweep is useful when your opponent is behind you, and both moves combine offence with defense and are effective against any aggressive move by your opponent.

6. Roundhouse Another classic karate move, the violent swivel kick which combines a hard kick with an about-face move. It can be a bit slow to execute, but has the advantage of putting off many aggressive moves by your opponent.

7. High And Low Punch These two are effectively the same, except that the low punch is executed while in the crouch position. They are useful in medium close fighting.

8. Jab Punch Most effective in very close fighting and the fastest move available. Beware your opponent using it because you may not even see it coming.

9. Somersaults There are two of these - forward and backward. Apart from the fact that these look attractive in play (!), they are useful for getting out of tight situations in a hurry.

It will be some time before you can class yourself as a master at this game, but that must be one of its great strengths. As a Grasshopper you should be able to make meat of the other guy with only a couple of good moves. I found the best was simply to sidle quietly up to the novice (ignoring his AAAAAAAHS EEEEEHS and HAAAETHA!) and bash him in the boat race, he invariably fell with a resounding and satisfying thud. Following opponents were never so gullible and it was me that got minced, until I learnt a few more tricks. That's what appeals to me about this game, it's immediately playable even while you are a beginner but the opponents get meaner as you get better.

Playing against the computer is pretty good preparation for a real fight against another player, that's when the game comes into its own. I would have preferred it if each successive opponent could have the decency to have dressed up in different togs, I kept underestimating them until a neat view of his dirty sole scrunching into my face reminded me that this guy was hot. The graphics and sound are terrific, the only thing that stops this game short of total realism is blood.

As a Karate Champ fanatic, I've been waiting for a decent C64 version for a long time. It has arrived with fantastic sound effects, state-of-the-art animation and brilliant gameplay. Although the wealth of kicks and punches might confuse a novice, they are easily learnt and once mastered you'll be able to battle away with a friend or a very UNfriendly computer opponent. I'd recommend this game to anyone who likes a challenge.

The first thing that really struck me about this brilliant version of Karate Champ was the excellent attention to detail and the quality of the animation of such impressively large characters. Melbourne House inform me that over 600 sprite images are used in the animation and on seeing the players move, you can well believe it! Due to the sensibly thought out controls, it only took a few games to get used to manoeuvring proficiently and I soon found myself performing some complex fighting moves with joy and ease.

The computer opponent proves intelligent and tough to beat, especially at later levels where there it becomes one hell of a challenge! The two-player option is great fun to play and gives you a chance to legally and satisfyingly cream a friend or two. The whole game, in fact, provides plenty of enjoyment and an outlet for some pent up aggression. The music played during the demo has an effective oriental flavour about it, as do the other pieces. The screams emitted on performing a move are a little crude but the frighteningly realistic bone crunching noises and moans of pain make delightfully up for that!

I don't think Exploding Fist lacks in lasting interest as it's one of those games that you can get out time and time again to relieve the day's tension.

Presentation 89%
Excellent instructions and options, especially use of the joystick.

Graphics 95%
Outstanding backdrops, great use of colour and fluid and lifelike animation.

Lastability 91%
Great to play and hard to master.

Value For Money 91%
Not over-priced for what it offers.

Great to play, hard to master... A slick, polished package, fun to play and requiring skill.