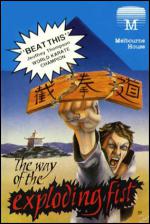 Launching The Hobbit on the Japanese market seems to have gone to Melbourne House's head with the release of this excellent Karate simulation.

The game's graphics are extremely sophisticated and the range of moves ensures a battle which would do justice to any Bruce Lee movie. Aggressive kicks, punches, sweeps and defensive crouches and somersaults are all possible in every imaginable combination, making full use of the joystick. Defensive moves are obtained using the eight joystick positions but pressing the fire button at the same time causes the sparks to fly with a range of eight kicks guaranteed to floor your opponent if used correctly.

A perfectly executed move which makes contact with your opponent gains a full 'yin-yang' symbol, a move which at least makes contact only gaining half a symbol. A numerical value is obtained also which takes into account the difficulty of the move. In the single player option two yin-yangs win the game, the two player game being the best of four timed bouts.

In the single player game against the computer, you start as a novice but winning the contest gains you a First Dan, and a more skillful opponent takes over. This continues until you reach Tenth Dan but what happens next I cannot say, the best I managed was Second Dan after playing for two hours!

The only gripes I have relate to the awful shouts emitted by the combatants and a niggling doubt as to the lasting enjoyment of the game. At the moment I'm hooked and the sounds can be switched off if desired.