﻿ The Way Of The Exploding Fist (Ricochet) Review | Crash - Everygamegoing 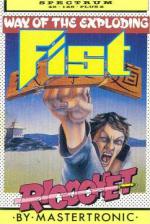 When Melbourne House's Way Of The Exploding Fist first hit the streets, it was heralded by CRASH as 'definitely the best beat-'em-up yet on the Spectrum'. As a one or two player game, it invites you to take part in a karate tournament; if you keep winning long enough you may even reach the exalted rank of Black Belt 10th Dan.

There are 18 different combat moves, including forward somersault, backward sweep, short jab kick and the mysterious Round House (very effective, but takes an age to get the hang of). The better your performance the higher your number of ying-yang points. (and you know what they say about getting your daily does of yings and yangs, don't you?) (No - Ed) (Oh well, never mind!).

What was an outstanding beat-'em-up in October 1985 isn't quite so astonishing now; the superior animation and greater complexity of games like IK+, Target; Renegade and Street Fighter has seen to that. If you're not too fussy about fancy graphics, can't get enough of beat-'em-ups and for some strange reason missed out on Exploding Fist when it first appeared, go out now and buy. After all £1.99 is a small price to pay for some pure, unadulterated, smash-it-up fun.

In October 1985, this was astounding. Obviously, the superior animation and greater complexity of games like IK+, Target: Renegade and Street Fighter has seen to that.