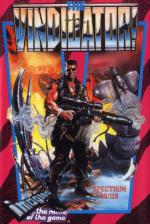 Sounds familiar? Well here's another one. In this case the hero's called The Vindicator, and the foe are a bunch of aliens from outer space. However, this time they've already done their stuff, and earth is in ruins. Only The Vindicator can save humanity by going in, and taking out the alien big cheese, in his underground catacombs.

For anyone still reading, I'll just point out that in this case the programmers seem to have done a pretty thorough job, and the result is a lot better than I was expecting. Normally in these situations, each level would probably last about two minutes, leaving you yearning for the password for the next one. But not this time! Here's a brief rundown.

Part one, is as usual the worst of the lot, so anyone trying it out in Smith's will probably make their excuses and sidle off. The idea is to wander round a 3D computer complex, opening doors, shooting alien guards and collecting pass cards and bits of the bomb you're s'posed to be building. There are some anagrams to answer too. It's okay, just a bit slow moving.

Part two is a lot more appealing, if a little shallower. It's a scrolling shoot 'em to bits, where you first fly a plane and then drive a jeep. The graphics are great, and move very quickly and smoothly. The plane part is fairly easy, but the jeep bit is another kettle of fish (whatever that means). I liked this part best, although it's not really much better than most budget games.

And finally the third chunk. This time you gotta find your way down the catacombs to take on Gog (sigh). The catacombs are split into loadsa different levels, which you must work your way down using lifts and trip-switches to open trapdoors. Of course, Gog isn't going to let you off that easily, so there are billions of baddies to maim 'n kill. Again, this section suffers a teeny bit from lack of speed, but not enough to totally wreck it.

To make things a little easier, once you've completed the first part you'll be given the password for the next one, which can then be accessed directly from the menu screen.

So what makes that lot stand out from every other game type 238b you've ever played? Well I just felt that this one looked much more polished than usual, and the various sections are almost worth playing as games in their own right for once. The only couple of niggles I do have are the sound - really disgusting tunes, and v. weedy spot effects, - and the multi load 48K.

But what it all boils down to is... a very tasty soup. No, I mean... three average games for the price of one good one. And if that sounds fine to you. this one carries my recommendation.

It's as original as a single by Kylie Minogue (who?) but I could play it over and over again (the game, not the record).

It's as original as a single by Kylie Minogue, but I could play it over and over again.