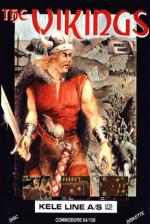 After the recent, albeit short-lived Swedish invasion, the Danes have launched an attack on the British charts and on Britain itself.

The Vikings, by Kelen Line, is a tale of pillage from the Dark Ages. In style, however, it is more reminiscent of Commando or Who Dares Wins II. The game concerns the rescue of a warrior queen who has been captured by the British. Well, it makes a change from rescuing princesses, I suppose.

The game is set on a pair of islands - apparently Britain used to be two islands! Although the queen is imprisoned on Death Island, it is Krag Island which holds the weaponry and other objects necessary for an attack on the northern isle.

In true Viking style, success requires the burning down of villagers' huts to find the equipment needed for the longboat which will carry you to the north. First you must find a spear and a shield, with which to beat off hordes of attackers, then you need a scaling ladder - to reach the flaming torch in the tower. Each time you play the game, the objects are found in the same locations so this phase of the game gets easy fast.

The next problem is how to get to the next island. It lies somewhere up north (heavy clue) but if your navigation goes wrong you will be able to watch as your ship sails gracefully off the edge of the world into the fires below.

Death Island is aptly named and not just because that was the usual fate of villagers who came up against intrepid Viking warriors but because the Saxon guards are supplemented by zombie skeletons. After fighting your way into a fortress, you pass into the sacred maze labyrinth to plunder the wine and treasure stores. The enchanted enclosure is the next hurdle you need to overcome before entering the royal stronghold where your queen awaits you.

Apart from interesting loading screens, which include a gigantic Viking picture which uses the border as well as the screen, the game itself is fairly run-of-the-mill. But if you prefer an earlier era to that of World War II then this game is OK, and no better or worse than the World War variety.

Apart from interesting loading screens, which include a gigantic Viking picture which uses the border as well as the screen, the game itself is fairly run-of-the-mill.