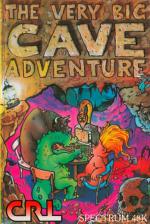 Right, you've seen this one in the shops and you now want to know how good it is. Well, it is Quilled, it's from the ST BRIDES team who have turned out some average to good but hardly commercial adventures. It reaches you in the shops courtesy of cat, a company which has little history in mainstream adventuring, but. I am pleased to say, they are now releasing some imaginative stuff.

Well, all in all it's pretty good, what with its humorous treatise of Colossal Cavern, the mainframe yarn that was the inspiration of many an early Spectrum adventure, and its quickly drawn graphics and powerful EXAMINE command. Considering its size (it comes in two parts) its price could be justified, but I consider it to be a shade on the expensive side.

You must excuse me if I seem to plod through this review. Like an editorial which went west recently, the first version of the Big Cave review similarly went astray somewhere between the Far North and the Middlemass of Ludlow. Exactly as forecast by a certain well known law, my backup copy flew out of the window when I moved house (which itself is another equally well-known sub law which states that when moving house anything you value is either lost or broken whereas the junk mysteriously survives usually at ankle or knee height in dark corridors).

Now, where was I, oh yes, the small brick building of the Crowther and Woods original. NORTH takes you to a secret hiding place (apparently on the Spectrum version only) curiously marked by a large and conspicuously flashing sign. Here are the first examples of the superb EXAMINE command where EXAM FOOD elicits 'It's a school dinner' (described as 'tasty' in the inventory!) while EXAM BOTTLE gives 'Green. Originally one of ten.' Travelling west takes the mickey out of all illogically mapped adventures whereby you find yourself on top of a small hill. 'Well, not that small. I notice you are out of breath and perspiring freely so I hope you will not fuss when I tell you that that this hill plays no particular part in the adventure and I have no idea why it's here. Contrary to the laws of geography going north will take you back to the road. Don't say I never tell you anything'. This witty and chatty style runs throughout the adventure and really is genuinely amusing.

To the east, the door of the small brick building is closed and something prevents it from opening. Examining the door reveals the problem. 'You see a brass mechanism attached to the door bearing the legend: VACANT. There is an aperture at the top of the mechanism approximately the thickness and diameter of one penny'. This carefully weighted style of writing nicely deposits the joke in your lap, a strength of the game I particularly enjoyed.

To the south of the start location, in a gully in the forest, you chance upon a Gully-Bull which, true to its name, is highly gullible and lets you steal the old penny there right from under its nose. Back to the wellie house and you discover the spring is not the watery kind but the springy kind springing you out of the place should you touch it. Taking on the bull again you read 'And you can see a rampaging bull with the distinct air of a bull who does not mean to be caught out a second time'.

Not all the adventure is directly concerned with Colossal Cavern. It's true that much of what's here is familiar, even if it has been given a new twist. The wellie-house is the original well house with its watery spring, the python of Big Cave being the snake of the original, and in this adventure the Ming vase is not dropped on the cushion as you might expect; instead dropping it anywhere else does the trick. Other themes running through this humorous trip are the raped crusaders of Gotham City, Alice in Wonderland, and lesser interludes like text-powered space invaders and a horror section. Certainly the Big Cave Adventure offers a great deal; it's not only a super spoof but a polished and well orchestrated adventure in its own right.

Offers a great deal; it's not only a super spoof but a polished and well orchestrated adventure in its own right.