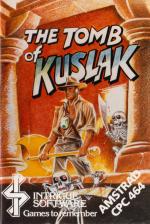 Intrigue Software have gone for the traditional Egyptian tomb scenario in this game, and really it's a bit *too* traditional for the Pilgrim's liking. This is one of those games which is really just a version of 3D Monster Maze - you wander around a maze of tunnels trying to grab four treasure before finding your way out again.

The best thing about this game is the nearly-arranged display, which is shown here annotated by yours truly so that you can see exactly what's going on. Unfortunately, there isn't much variety in the program, which simply encourages you to wander round fighting with bats, wolves, skeletons and suchlike in a very random and rather unexciting fashion. To call it "a graphic and text adventure with over 240 locations" is, I'm afraid, very misleading - at least insofar as I understand the terms being used. If you like 3D Monster Maze then you'll probably get a kick out of this game, but most true-blooded adventurers will throw up their hands in despair.

The only thing I can really say in this game's favour is that it might go down well with young children, since there are only four commands to use (GET, DROP, USE and FIGHT) plus the directions N,S,E,W,U,D so you don't need to know how to spell in order to play. The game is a reasonable example of Basic programming - the pictures draw quite fast and I suppose the whole thing goes to show what can be done in Locomotive's Basic - but I'm far from convinced that these points make it worth either the asking price (£7.50) or your experienced attention.

If you like 3D Monster Maze then you'll probably get a kick out of this game, but most true-blooded adventurers will throw up their hands in despair.