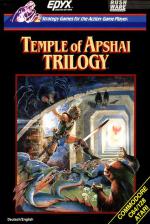 In the earliest days of home computers, role playing games had just begun to achieve relative mass appeal. Advanced Dungeons and Dragons had been on the market for only a short while and had become instantly successful. It was at this time that the then young Epyx brought out The Temple of Apshai, intending it to be real role playing on a home micro.

The success of the first title led to the rest of the Apshai Trilogy which included Upper Reaches of Apshai and the Curse of Ra. All the titles were expensive, totalling nearly a hundred pounds together. They were primitive as well. 16K ROM cartridges were used for the originals and little was understood about the capabilities of the micros for which they were produced.

Now, some years later, Epyx have updated the appearance and capabilities of all three programs and repackaged them as the Apshai Trilogy. What's more, they're all on one diskette at less than a third of their original high price! But for those of you who missed them first time around, here's a run down on what all the fuss is about.

What you gel for your pennies is a disk (which may be used for saved games), an instruction booklet detailing the world of Apshai as well as the game itself and a summary card to speed up play. The disk utilises a turbo load technique and therefore presents you with a title screen and tune faster than you may expect. Leading on from this screen is the Innkeeper's screen which heralds game setup. It's a kind of tradition that all the best role playing games begin in a tavern or bar (perhaps it reflects upon the kind of people who play the games themselves). On this screen a saved character for the game may be called from disk, a randomly generated character selected, or your own character may be created.

There are six major characteristics: Strength, Constitution, Dexterity, Intelligence, Intuition and Ego. As in the more popular role playing games, the characteristics are generated on a 3D6 (three, six-sided dice) probability curve. The lowest characteristic is 3 and the highest 18, averaging out at 10-11. The values of these attributes affect the abilities of the character.

All characters (except those created by the player) begin with 120 silver pieces to spend on weapons and equipment from the innkeeper. Unless haggling tactics are used, the character will be taken for everything he has, so be careful. The variety of weapons, armour and miscellaneous items available for purchase from the innkeeper is great, so characters may be kitted out individually. Weapons and armour may be magical, but such items are only available through adventuring. If they are, there will be bonuses to a character's actions in combat.

After the character is equipped, the option to enter the dungeon is presented. Any of the three Realms that make up the trilogy may be selected followed by the Level, 1-4, in terms of difficulty. Once the dungeon has been entered, your character is displayed surrounded by the area of the dungeon within his field of vision. To the right of this display is a status screen showing the fitness of the character, weapon, inventory and message window.

To move the character, the 1-9 keys are pressed to indicate how many steps are taken that turn. The more steps, the faster the character is moving and consequently, the sooner he will become exhausted. To change facing, the L and R keys turn 'you' 90 degrees left or right, or the V key produces a 'volte-face' 180 degree turn. When the character moves, the screen scrolls and reveals new areas of the dungeon in doing so. In this fashion, the entire dungeon complex may be explored. To enter rooms, pick up treasure for search or hidden doors, special one-key commands may be referenced from the Command Card and implemented as required.

Eventually, your character will encounter one of the many creatures inhabiting the dungeons. It is possible to run away, but as such is not the stuff of adventuring, combat is likely to ensue. Attacking the creature with a melee weapon requires no fast joystick handling as the whole thing is moderated by the use of turns. The Attack command allows a simple jab at the enemy, while Thrust is an all out hack. This increases your chances of hitting the creature and of delivering a mortal blow, but the creature's chances of successfully causing a wound are also increased. Arrows (both magic and normal) may be used as ranged weapons and usually kill anything they hit. But of course, you only have a limited supply of these.

Combat need not necessarily be the inevitable course of action when a creature is encountered. It is sometimes possible to parley with them, using the commands available. If combat is commenced against every creature you encounter, it is still possible to do well in the game but you may well miss out on some treasure. Where to fight and where to parley is only learned with practice.

At various points in the game, you may find your way back to the entrance point to a dungeon level and return to the inn from there. This is the point where games and characters may be saved. On the game disk, there is room for up to one game and fifty characters. It would take many hours continual play to complete the game in a single session, so both of these options should be used from time to time.

After teaching you how to play, the manual is far from redundant. It describes the different creatures you are likely to meet in the Apshai dungeons, hints on play and, perhaps most useful, provides text descriptions of various locations and treasure details. It is intended to be a valuable aid throughout play and any adventurer will find that the information it provides is far from irrelevant. If you are to successfully explore the entire dungeon network, you have to build up wealth, knowledge and experience. And that is going to mean a lot of games.

The game brings back memories of my first role playing experiences. Although for a computer game the system is highly complex in terms of authenticity, the game still relies on monster hacking rather than subtleties of what RPG gamers would refer to as Non Player Character interaction. Bearing this limitation in mind, any role player looking for a computer based solo campaign allowing him or her to use a character from a conventional game should look no further than this.

On the other hand, anybody interested in role playing could learn many of the basics from playing this relatively cheap game (role playing is so expensive to get into, nowadays). Characters really do develop well within the constraints of computerised format. Many other 'traditional' role playing elements are also to be found in the game and the whole thing isn't even lacking a sense of humour. Epyx definitely made the right move, remaking and releasing the product. The original was designed with seldom seen care. A pleasure to play, from start to finish.

Graphics 79%
Great compared to the original but still simplistic.

Instructions 88%
Highly readable, even if you never played the game!

Authenticity 85%
The turns have been excellently designed for role playing simulation.

Playability 82%
Unless you cheat to get an unbeatable character, this game should give anyone a good run for their money. One slightly off-putting detail is the sometimes repetitive nature of combat.

Great! The best graphic role playing simulation on the Commodore. A pleasure to play, from start to finish.