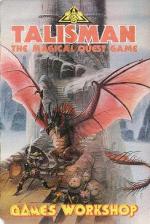 Games Workshop define The Talisman as an interactive multi-player arcade adventure. Up to four players can take part, each one choosing a role from a set of 10 stock dungeons-and-dragons cast members - elf, assassin, sorceress, thief and so on. If you play on your own you can nominate up to three other computer-run characters or just go solo.

There are three playing speeds - laid back, moderate or speedy. In the speedy mode computer-run characters will zoom about like demented silent-film stars and only experts should enter this fast motion world.

Although the cassette blurb likens the game to Valhalla there is no proper text input and most decisions and actions are performed by single key-presses.

The screen is split into two major sections. Up top is the location picture and the path on which the characters move about. Below are the various status indicators - strength, wealth, spells - an hourglass to time your move, along with the occasional reports and details of 'followers' - non-player characters who can be enlisted into your band.

You move your character, a small black silhouette, by a simple left/right cursor with the occasional choice of compass points if you reach an edge. There are about 50 locations, though some seem rather similar. They are not all labelled.

You do not have to stop in a location but if you do you may be able to pick up objects which are strewn about. By stopping you also open yourself to attacks from the multitude of monsters who dominate the land. Spells can be used as well as brute force. Spells seem a bit surer - when I chose to be a mighty warrior I was defeated by a farmer, of all things!

Although it is not as big and does not have the crowds of characters who mill about in Valhalla it has a similar feel but with faster action. The graphics are limited and you should not expect something along the lines of Knight Lore.

What the game does provide is a relatively complete translation of D&D motifs to computer. If you have ever played board games like Sorcerer's Cave you will find this to be very similar. Learning to play properly will take practice as there is real-time action which needs fast responses. If you dither you are lost. Even with four players it is unlikely that anyone will be bored as the action can be quite entertaining, even to watch. This gives The Talisman an edge over text-based multiple player games. Very much for those who prefer arcade-style stimulation as there is no time for reflection once it is your turn.

Even with four players it is unlikely that anyone will be bored as the action can be quite entertaining, even to watch. This gives The Talisman an edge over text-based multiple player games.