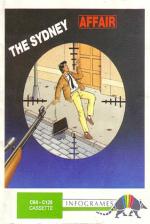 James Sydney has been murdered - a rifle bullet left his skull having first paid a call on his brain. It's your job to find out whodunnit.

The Sydney Affair - the second interactive crime investigation adventure from Infogrames - puts you firmly in the shoes of a French detective, attempting to unearth a murderer by routine investigation.

On beginning the case you are faced with the scene of the crime. A thorough search of the deceased and his surroundings reveals certain items of evidence - photographs of which may be taken by positioning a cursor on the desired spot and pressing f7. Items of interest are shown in close-up and a description given.

When the whole screen has been scrutinised, you are taken to the flat from where the shot was fired. Here the same routine is carried out, with you looking for clues and making notes as you go.

When all the evidence has been obtained, you return to the police station and begin collating the facts. An information screen appears from which you can access the 'Diamond Computer Network' to find out information about the deceased, his family, and witnesses to the crime. This network also allows an examination of the evidence.

The computer system links you to different sections of the police network such as the District Squad for Judicial Information, the Judicial Research and Comparison

Infogrames' follow-up to The Vera Cruz Affair is not terribly inspired. The first section is easy enough, and obtaining clues follows a logical enough path, but it is when stage two has been entered that things start to grind to a halt.

The difficulty involved in using the Diamond Computer Network is exacerbated by the lack of instruction included. This seriously flaws the program, and dampens the enthusiasm, which was reasonably high until this point. Definitely user-unfriendly, The Sydney Affair may still appeal to fans of the earlier Vera Cruz Affair, but for a first-time buy whodunnit fans should look elsewhere - maybe to Killed Until Dead?

The first section is almost pointless, simply move a cursor over the screen and collect evidence - it's almost impossible to overlook or miss anything. The game really starts in the second section but even this is highly frustrating due to the lack of instruction.

There's no atmosphere, and communicating via the computer is slow and uninteresting. Sure, a fair bit of thought is involved when cross-referencing evidence, but I never felt as though I was making any significant difference to the outcome.

The parser is limited, and the response 'Without interest' to a slightly incorrect input makes many an unwelcome appearance - which hardly inspires further play. For a whodunnit with class, try Killed Until Dead - it's far more absorbing, amusing and playable.

In the tradition of the great Inspector Clouseau, this adventure is a real 'shot in the dark' - there's so little to go on. The clues and statements are sparse but pleasantly presented, although the regular appearance of errors in grammar and spelling tend to mar the presentation.

The input is quite user-friendly (a fair amount of abbreviation seems to be acceptable), but the standard reply of 'without interest' for both incorrect input and irrelevant questioning could throw even the most ardent adventurer off the track.

This mystery has definitely been designed and programmed for the experienced sleuth.

Presentation 54%
Inadequate instruction which makes the game seem more complex than it really is. Minimal on-screen information, and no save game option.

Sound 0%
Nothing more than a gunshot on the loading screen.

Hookability 65%
The first stage is simple to complete and successfully finding clues is quite enjoyable, but the second stage can prove deceptively overwhelming.

Value For Money 45%
Overpriced, especially when the limited gameplay and presentation is taken into account.

Overall 57%
Nothing more than an average and limited murder mystery.

Nothing more than an average and limited murder mystery.