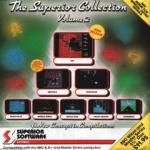 Kix is a version of Qix, a minor arcade hit. The playing area is a large square, known as the quadrant, in which you control the movement of a small cursor - the Kix - which leaves a trail as it moves.

Your aim is to use the trail to form an enclosed shape, which is then filled with colour. Once you have coloured 75 percent of the quadrant you move on to level two - there are 20 levels in all.

Bouncing around thequadrant is a cloud of energy called a sparkler. If this touches your trail before you have completed a shape then you lose a life.

Additional problems are provided bytracers, small shapes similar to the Kix which crawl along your trail towards you. Kix is a superb conversion from the original - top marks.

In Deathstar you hurtle round the void of space, blasting asteroids with laser fire and causing them to emit energy crystals. You need these to make the starbombs which can destroy the huge Deathstar which the aliens are constructing. But the aliens will try and steal the crystals for their own devices.

All you can do is blast everything in sight and have a great time - for soon the deathstar cometh!

Missile Strike is a great conversion of the classic game Missile Command.

Your task is to protect six neighbouring cities by shooting down enemy projectiles. Variety comes in the shape of aircraft, satellites, multi-warhead devices and intelligent homing missiles.

Repton 2 is the updated version of the original Repton. Unlike Repton, where each level was tackled individually, the 16 levels are all linked by transporters, effectively making them into one gigantic playing area.

This is a magnificent game of epic proportions that is riddled with monsters, spirits, safesandthe inevitable devious puzzles.

Moving back into the arcades we have Crazy Painter, a version of Amidar. Travelling ona large grid you attempt to "paint" around each square. As one is completed it is filled with colour, and if you manage to paint the whole grid you move on to level two, via a bonus screen.

On every screen you are pursued by nasty natives or terrible teddies, which hunt you relentlessly. Once again a competent conversion from the original.

Space Pilot has always been an arcade favourite of mine and Superior's version is a stunner.

Soaring round the skies in your high-powered jet fighter, you blast First World War biplanes to smithereens - oh the joy of unlimited fire power!

The next waves consist of Spitfires, helicopter gunships, jet fighters, and finally UFOs. Watch out for the homing missiles that are launched from the modern aircraft. Superb graphics and fast action make Space Pilot a winner.

Yet another arcade conversion is Battle Tank, modelled on Battlezone. Sitting at the controls of your tank you locate your next victim on the radar scanner. Swinging the machine around you race towards the enemy, your target comes within range, you loose a shell - kaboom! Exit one enemy tank.

Unfortunately, Battle Tank isn't quite as fast as the original and the graphics are nowhere near as good - but you forget these quibbles when you're running for your life.

The final offering in Volume 2 is Overdrive, a motor racing game of sorts.

This is the only disappointing game of the compilation. You drive along a straight road as fast as possible, trying to avoid the cars that appear in front of you. I soon found it very boring.

At just £1 for each game, the Superior Collection Volume 2 is a must for anyone wanting a collection of arcade greats.

At just £1 for each game, the Superior Collection Volume 2 is a must for anyone wanting a collection of arcade greats.
Logout