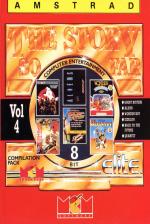 The second eight bit selection box from Elite brings mixed blessings. The chance to get to grips with Aliens is welcome as one of the best movie licences of all time as you chase those ectomorphs around. The rest let Ripley and Co. down rather badly.

The other five are OK, but they don't grab you by the joystick port crying "Play me!". As a gift it wouldn't go amiss, but as a pressie buy ask Santa for something else.

Wonder Boy is a running, jumping platform game and adds nothing to the genre (it's soon to spawn a sequel). Ghostbusters (the follow up to this baby will be haunting us at Christmas as well) has you gunning down naughty spooks. The Eidolon takes you time travelling in a deserted old house and Back To The Future follows the plot of the film but does so with graphics so inept it's hard to believe. But you've got to look on the bright side... there could be a sequel to this on the way too!

The package offers no real support to its leader; more an excuse to fill blank tape than make serious games. Some games stand the test of time and Aliens is one of them. Strangely, they were all reasonable successes in their day despite critical hammering, so they may sell on nostalgia value alone. "The first game I played was..."

As a history lesson this is fine, but as contemporary entertainment forget it. Aliens is still brilliant but the others just don't support it. If you're looking for compilation fun from Elite, get Volume II instead.

Overall 76%
A bundle of games is only as strong as its weakest game, and Quartet really is quite dire.

As a history lesson this is fine, but as contemporary entertainment forget it. Aliens is still brilliant but the others just don't support it.
Logout