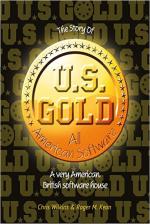 The Story Of U.S. Gold 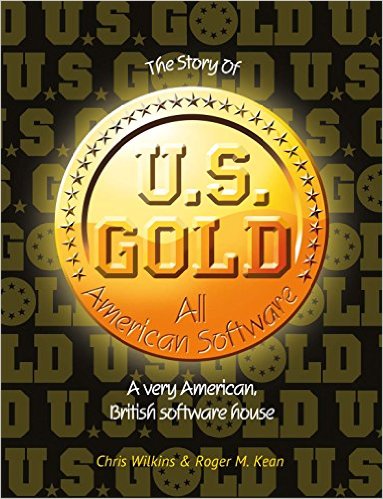 Times change, and yet some things remain constant. Pick up any old Eighties, Nineties or Noughties computer magazine and, sandwiched between advertisements for games, and reviews of them, you'll often find articles devoted to a particular publisher - Level 9, Superior Software, U.S. Gold.

Except that U.S. Gold wasn't just a publisher. It was developer, publisher, international distributor and multi-multi-million pound behemoth that dominated, at least initially, the Commodore 64, Amstrad and Spectrum marketplace. U.S. Gold did so much that it needed a book rather than a three-page "special". And so that's what Chris Wilkins & Roger M. Kean have written - The Story Of U.S. Gold.

It weighs in at 236 pages, with a shiny golden cover embossed with the U.S. Gold logo. It's printed on glossy pages and liberally illustrated with hundreds of game screenshots, photographs and adverts from the period. The period it coves in detail is approximately 1982-2002 - so if your favourite retro computer was available during that time, it will certainly figure somewhere in the book's narrative.

And what a narrative it is! Part biography, part business manual, part nostalgia fix and several other parts indescribable, those who ran U.S. Gold the company come across as ballsy, ruthless (and on some occasions foul-mouthed) businesspeople. They attacked the rather staid state of British software with quality American produce - and did so with all the subtlety of a sledgehammer.

The first thing you notice about the story itself is that it isn't divided into chapters. Every few pages, there may be a subheading which gives stalwart retrogamers a clue as to which particular part of the saga comes next... but in many respects it reads more like an essay than an actual story.

The second thing is that the story, in the sense of the chronological account of "what happened in what order", takes up just the first 117 pages. The book is almost split almost evenly into two very different halves. The remainder is filled with articles of different lengths - everything from the art of U.S. Gold's loading screens to how the music was composed for various titles, and by whom.

I quite liked this division because I personally found the recollections of some of the principal players rather too arrogant for my liking. The articles at the back are written with much more humility and are much more interesting to read because they're short and focussed, and you can quite easily pick out the subjects (or authors) who interest you the most.

As for the story of U.S. Gold itself, about the best that I can say is that it's a brave attempt to tell the definitive story of a business at the top of its game. It's so comprehensive and immaculately presented that it will doubtless find its place on many coffee tables.

However, if I were to sum up the story in a single sentence, it would be: "The story of how we were the first to buy software from the US and sell it to Europe, and how we were able to stop anyone else being able to do anything similar for twenty years." It's a story of remarkable business nous, foresight and luck – and this book simply tells it like it is, and as it happened.

To what end though, I'm not exactly sure. As an example, consider its resume of the World Cup Carnival saga – this outrage occurred across multiple machine formats and involved tens of thousands of gamers being ripped off (by U.S. Gold) in the mid-Eighties. This story goes as follows: U.S. Gold licensed the official World Cup Carnival name. However, it needed to get a game with that name on the shelves quickly to capitalise on the surrounding football fever. So it bought up Artic Computing's World Cup Football (a rubbish three-year old game), threw it, some stickers and a wallchart in a very attractive-looking box, didn't send out any copies for review but instead invested even more heavily than usual in marketing its amazing "new" title.

The game sold in its tens of thousands and, whilst it immediately attracted the ire of reviewers, wholesalers and buyers alike, in the story of U.S. Gold, there was no noticeable effect on subsequent sales revenue. So apparently, that was all all right then. Moral? You decide.

Now consider Tim Chaney's current thoughts for this definitive account of one of U.S. Gold's not-so-finest hours, and spare a thought for all those poor kiddywinks who are reading his thoughts having shelled out £9.99 for this game back in the day. Might they not deserve an apology for that after all these years?

Quite. Essentially, this is the problem with large swathes of the story of U.S. Gold. We clearly owe U.S. Gold a great deal of gratitude for bringing us many of the games we remember from our formative years. The trouble is that an extremely detailed account of how rich they made themselves isn't particularly endearing, or indeed interesting. Even if you didn't buy World Cup Carnival and you were U.S. Gold's biggest fan prior to reading this, such a lack of humility takes the story somewhere you'd rather it didn't go.

What's worse still is that, in the story part of the book, the style of writing mirrors precisely how U.S. Gold actually operated - i.e. it's dry, humourless, direct, factual and unapologetic. In fact I doubt I'll ever re-read it; I'll probably just stick to the second part with its articles describing the wonderful games U.S. Gold brought to our shores instead.

In summary, U.S. Gold made millions, and the book explains how. But for all its wonderful presentation, I'm afraid the story left me cold.