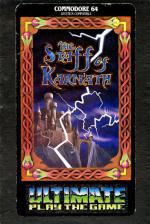 This could be taken as a bad omen for Spectrum owners - for the very first Ultimate game for the Commodore 64. Are the enigmatic Players Of The Game testing the waters, on the theory that the Speck is now completely played out? Or are they merely diversifying? In either case, Staff Of Karnath is an odd move. One might more reasonably have expected a Sabre Wulf conversion, cashing in all that publicity, but what we have here is a completely new game.

Staff Of Karnath is constructed along very familiar Ultimate lines. It's a graphic adventure on a Gothic theme, and in many ways resembles Knight Lore, the last Spectrum Sabre Wulf follow-up. The scenario is a haunted castle full of suits of armour, old weapons, demons and so forth - the usual paraphernalia. As the rather nondescript player figure, your object is to acquire the sixteen sections of a magic pentacle which are hidden all over the castle and usually guarded by vicious beasties.

Each section must be taken down to an obelisk in the basement to be deposited, and when all the bits have been placed, you will then be able to locate the afore-mentioned Staff, which must be destroyed by the appropriate spell.

The problem is to do it in time - you have six hours to complete the quest, which seems like plenty until you discover that some of the guardians use up your time if they hit you. Most of them, however, simply use up your energy - bad enough, although it's reset to 100% every time you deposit a pentacle piece. You do have a choice of a number of spells to hold off the baddies, but each spell is specific to a given being - the only way to find out which is trial and error.

I was disappointed. This game is certainly no turkey - I can't imagine Ultimate turning out a real dodo. But comparing it, perhaps unfairly, with their excellent Spectrum output - it simply looks crude. A lot of people decried the monochrome graphics on Knight Lore, but I felt that they lent the game a very precise, well-draughted look. CBM graphics always tend to tempt software houses in excess use of colour, and this is what's happened here, I think. The castle, with its great galleries and dungeons is well enough realised, but the player figures lack and real individuality, unlike the shape-changing Sabreman and the Goblin Guards in Knight Lore.

Perhaps more damning is the game's lack of three dimensionality. The oblique viewpoint resembles that used in Knight Lore, but objects just don't have the same depth - you can't walk behind the furniture, sometimes the game registers a collision when in fact you are miles behind the hostile guard, and you can't move things around - the environment doesn't respond to you much. On top of this, the game lacks a sense of mystery - unlike the Spectrum games, you're told most of the game object before you start. I rather like trying to figure it out.

Still, Staff Of Karnath is a first, and better than a lot of contemporary CBM stuff - I'd rather play this than most of the over-acclaimed Llamasoft games. But I find Ultimate guilty of raising my expectations, and they just can't be unraised, I'm afraid.

Staff Of Karnath is a first, and better than a lot of contemporary CBM stuff.