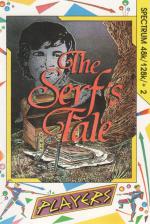 I have to admit that this cassette has been lying on my desk neglected and un-loaded for at least a couple of months. Who wants yet another version of Colossal Cave Adventure, I thought, that being essentially what this is. Never mind, the wait has enabled the original independent publishers, Adventure Software, to sell the game to Players for wider distribution. It's also changed its own name to Smart Egg Software.

So who does want yet another version of Colossal Cave? Well, anybody who's at all interested in adventures, I reckon. As I read through the background notes, I was very dubious to see that the programmers had taken it upon themselves to increase the number of locations by a third, including a completely new 30-location introduction to the adventure. He who tampers with an old favourite is running a grave danger of getting a very loud raspberry if it isn't well done. Fortunately The Serf's Tale is very well done indeed. A storyline has been created to explain just why you find yourself standing one day outside a small brick building, and the extra locations mean that the game isn't simply a case of going in, getting everything and then getting on with it. You'll need to find coins and a map, for starters, and the provisions are hidden away as well. The text for this storyline and in the location descriptions is perfectly done to complement the original, and it all adds a great deal to the atmosphere when you enter the familiar underground network of caves - and they must be familiar to people by now.

This isn't all, though, as the program itself has some great features. Commands available include RAM SAVE/LOAD, GET/DROP ALL, FULL/BRIEF for location descriptions, pockets in adventurers' clothing in which you can PUT and RETRIEVE things and a fully used EXAMINE command. The text has been redesigned and looks a treat, and I reckon it'll sell thousands.

The text has been redesigned and looks a treat, and I reckon it'll sell thousands.