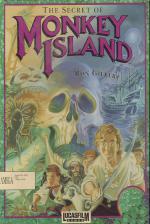 Life has not been good to Guybrush Threepwood. No excitement. No money. No women.

But now he has had enough; in his quest for fame, fortune and females, Guybrush has set out to become the most daring pirate to sail the Caribbean in the whole 18th Century. His story starts on Melee Island, home port to the world's most immoral sailors, where he is looking for a job.

Unfortunately, Guybrush finds that the pirate community of the Caribbean has been suffering from a labour crisis ever since the evil spirit of Captain LeChuck put to sea in his ghostly galleon and began terrorising the local seamen. Luckily though, with such a crisis on their hands, the pirate chiefs are more than willing to recruit new blood, and they quickly despatch Guybrush to complete three trials - defeat the island's Swordmaster, steal a fabulous idol from the mansion of the Governor and find the lost treasure of Melee Island.

Those are no easy tasks, and the game is by no means over when they are complete. The quest leads Guybrush from Melee Island across unknown waters, to Monkey Island, where he must face diet-conscious cannibals, insane castaways and the fearsome phantom pirate, LeChuck...!

Every pirate needs to know one end of his cutlass from the other, but successful swordplay isn't just down to speed and strength, as Captain Smirk here explains. Razor sharp wit is the mark of a good swordsman, and knowing the right insult for the right occasion can cut your opponent to the quick far more effectively than a steel blade.

Test your skill against Melee Island's finest corsairs, but to impress the pirate leaders you must defeat Carla, the Swordmaster.

Guybrush Threepwood was a would-be pirate, stealing an idol from her mansion. Elaine Marley was Melee Island's governor, a woman with power and responsibility, but when her eyes met his, sparks flew and made little scorch marks in the carpet!

Alas, their romance is to be cut short, for Elaine is none other than the past lover of Captain LeChuck, and before Guybrush can plant the first smooch, LeChuck returns in spectral form to claim her back and carry her off to his hideaway on Monkey Island.

Guybrush has no choice but to find a ship and crew, then head off after him to retrieve his lost "Sugar Boots"! (And that's where the story really starts!)

Ah yes, but before you can go after LeChuck and rescue Elaine you need a ship, and where better to find one than at Stan's Previously Owned Vessels? Whether you want a 200 foot galleon with two swimming pools and a revolving ballroom, or the only vessel ever to have survived the perils of Monkey Island (Aha!), Stan ("I won't shut up till I've made a deal") promises to have the ship to suit you in his boatyard.

Don't be afraid to haggle either - Stan loves it, but these days you need at least 5,000 pieces of eight to buy the right boat. Perhaps a little consumer credit is called for?

The Lucasfilm adventures have always been favourites in our office, but this is the first one I've wanted to play right until the end. In the week since I got hold of this game, I've spent every spare moment playing it and enjoying it!

Usually, the entertainment you get from an adventure is derived solely from solving puzzles, but the hilarious characters and situations, and the movie-like presentation (with cut-scenes and various "camera" viewpoints) make playing this more like taking part in a comedy film so it's much more enjoyable.

The puzzles are brilliantly conceived too, and success depends more on looking and listening, which I think is preferable to mind-bending lateral thinking.

Lucasfilm's easy-to-use, point-and-click command system rides again in Monkey Island, so even the laser-brains with keyboardphobia have no excuse not to get hold of this utterly enthralling game at once!

Utterly enthralling... The puzzles are brilliantly conceived. Success depends more on looking and listening, which I think is preferable to mind-bending lateral thinking.