﻿ The Secret of Levitation (Americana) Review | Your Sinclair - Everygamegoing

1st July 1986
The Secret of Levitation
By Americana
•
Spectrum 48K 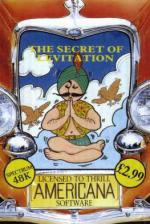 The Secret Of Levitation

If you fancy learning to fly then US Gold's cheapie label has the game for you. I said fly but I didn't mean supersonic fighters or Branson-style jumbo jets... no this is the real McCoy - yer actual levitation.

Mind you, the idea of levitation is somewhat of an after-thought to tie nine, otherwise totally unconnected programs together to produce an entire game. To be fair, it's best to think of the game as a collection rather than an individual title.

All nine programs are linked together by a high score. Once you achieve a score of about 1000, Sidha, an Indian chappie in the lotus position, gets to rise high above the ground (without the aid of a curry), transform himself into an ethereal form and float happily away through the top of the screen, Far out!

You'll need either very fast and accurate reactions or a damn good memory to play most of the games. Try taking your finger off a key when one of foul Sidhas disappears whilst pressing another one to indicate which Sidha vanished.

The memory tests are much more um.. er.. I've forgotten... yes interesting even if they are a little reminiscent of an IQ test. First you have to match up patterns, trace around a specific pattern in a jumbled mass of lines and then you have to remember which patterns - from a random selection - were displayed on-screen for 30 seconds.. and all against the clock! Phew!

It may not sound very interesting but each game has a very competitive edge and there all very addictive - to the point of frustration.

The Secret Of Levitation has none of the inventiveness, originality and graphic flair of some of the more upmarket games but it does have something... and I'm not just talking about low price.

The Secret Of Levitation

Although this adventure has none of the inventiveness, originality and graphic flair of some of the more upmarket games, it does have "something" about it.