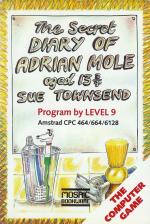 I think just about everyone must have come across Sue Townsend's books about this infamous school-boy by now. His daily exploits, as reported by the lad himself in the form of short, but very amusing, entries in his diary, have sold umpteen mega-millions of copies around the world. Doubtless this game will add to the various bank balances concerned, and also divert some of the moulah into the pockets of Mosaic, who publish it, and Level 9, who programmed it.

Unlike Eric The Viking, another book spin-off done by Level 9 for Mosaic, this little number isn't really what I'd call a true adventure - it must, however, be the closest thing to a computerised book I've yet come across. The statistics are pretty staggering - Level 9 have made a Mole-hill out of a mountain by compressing 220K of text (about 37,000 words by my reckoning) into four separate loads from cassette, 50% of this is completely new material, written by Pete Austin of Level 9 - and all I can say is that if Sue Townsend ever wants a holiday, she should get Pete to stand in for her - most of the new material is very amusing, very Mole-ish, and quite undetectable as being the work of a third-party.

The top of the screen shows some rather rudimentary, but quite colourful, graphics - though if you've got a green screen you may find yourself wondering what exactly some of them are supposed to represent. The various diary entries then scroll up the bottom half of the screen - they even keep scrolling while the pictures are drawing so you don't have to hang around.

The first impression one has on playing the game is that there isn't going to be anything to do except watch as diary entry after diary entry scrolls up the screen, pausing for you to push SHIFT after each screenful before scrolling relentlessly onward. It does, however, make very good reading - even if you think you know the books backward.

The format of the game is rather similar to the old Fighting Fantasy books, where at various points in the action you get a chance to select a course of action from a small list, usually of three options. Every so often, young Adrian pauses in his scribbling to face a crucial decision - should he squeeze his spots or put Savlon on them? Should he invite Pandora to join the Anti-Smoking group or not? These decisions then affect the course of action related in the diaries and also alter people's opinions of him. The aim of the game is to get as high a score as possible by keeping everybody happy.

Unlike an ordinary adventure this game will, I presume, take more or less the same amount of time to play each time - depending, of course, on how fast you read the text and how quickly you decide on the various courses of action. These are presented quite frequently and do give the impression of having some effect on the plot. Pilgrim played the first episode several times and discerned a number of major changes in the storyline, though of course certain events crucial to the overall structure of the story (such as meeting Bert Baxter, the OAP) will recur each time.

One thing that may worry Amstrad owners who have read the books is whether or not there will be any real surprises in the game. As it happens, I'm quite a fan of the Adrian Mole series, and have also seen the play - as well as watching it on television. Despite this, I was impressed by the way in which the game introduced new material while still retaining all the flavour of the original. That's not to say that a lot of the situations won't be familiar to Mole fans - but there are any unexpected twists, so you won't be able to sail through making the right decision each time, even if you know the books backwards.

Your score is frequently displayed (as an entry in the diary, of course) and is expressed as a percentage and an accompanying comment - along thelines of 'naughty boy' or 'polite youth'. The most I managed was 62%, but then I wasn't too keen on some of the more obvious suggestions designed to curry favour with Mum, Dad and Mr. Scruton the Headmaster. One point here, of course, is that when you're tried of trying to get the highest score, you could always play the game the other way round and try to get the lowest!

I suppose that in many ways this game isn't an adventure at all - after all, there are no locations to be explored, just sequences of events to be followed as they are related in hilarious Mole-ish prose. Whichever way you play, however, I reckon you'll find this a very worthwhile addition to your collection.

An impressive variety of addition situations that won't be familiar to Mole fans... There are any unexpected twists, so you won't be able to sail through making the right decision each time, even if you know the books backwards.