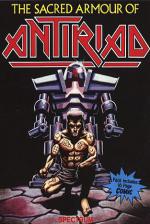 A new Dark Ages developed in the centuries after the Holocaust and with it, a hardy race of Barbarians. Just as they were coming to terms with their simple existence, an invasion of alien beings quickly destroyed everything that they had worked for.

Bravery was no match for sophisticated weaponry and the Barbarians were soon enslaved and forced to work the mines. They still held hopes of rebellion though and started hiding all the male children born and teaching them the sacred battle arts. It soon became clear that one man, Tal, had the markings of a hero and it was he that was charged with the task of finding and assembling the various pieces of the Sacred Armour Of Antiriad - the one artifact to survive the Holocaust - and using its powers to destroy the tyrants.

The game starts with you as a Barbarian, leaping through the trees with only the rocks that you pick up for weapons against the creatures of the forest. Below the display is a panel, still dormant. Only when you find the suit does it crackle into life but still, this is not enough. The forces of gravity are strong and you need to find the anti-grav boots if you are to progress. One feature of the suit though is that it does restore your energy and the display panel now gives you an indication of when your energy is failing and you need to return to the suit for a top up.

Possession of the boots allows Tal to levitate and explore the ruined city on the edge of the volcano. Now the search is on for a weapon - a pulsar beam. Particle negators and implosion mines are also required as you dodge and fight the aliens.

Graphically stunning and accompanied by a sixteen page comic, Antiriad is a worthy successor to Palace's pumpkin games, and looks set to be one of the arcade adventures of the year.

One of the arcade adventures of the year.